New fighting between northern Mali’s Arab community and Tuareg rebels working with French intervention forces in the region threatens to escalate into a wider ethnic conflict in the run-up to July’s national elections. While efforts are under way to ease tensions between the communities, there is also suspicion that some of these efforts are opportunistic and designed to advance certain personal political agendas. 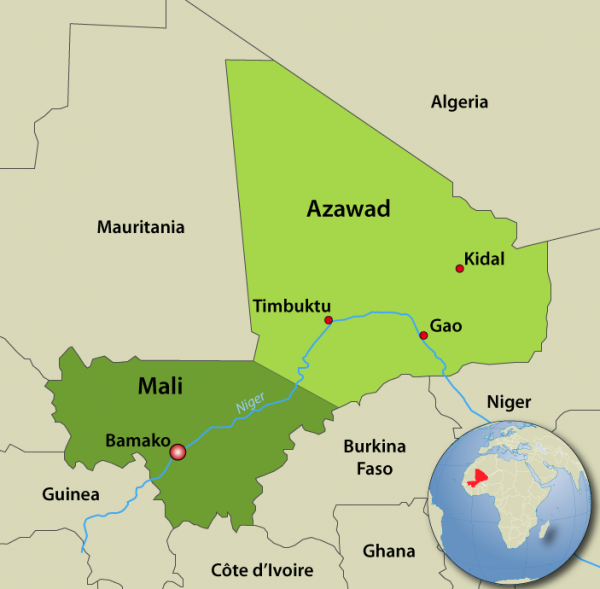 The clashes, centered around the town of Bir, have involved members of the largely Tuareg Mouvement National de Libération de l’Azawad (MNLA – a secular separatist movement) and the Mouvement Arabe de l’Azawad (MAA), an Arab militia created in February 2012 as the Front de Libération nationale de l’Azawad (FLNA) and formed from members of earlier Arab militias and Arab soldiers of the Malian Army who deserted after the fall of Timbuktu to Islamist groups last year.

The MAA announced it had expelled Tuareg fighters belonging to the MNLA from the town of Bir (30 miles northeast of Timbuktu) on April 22 after 14 to 15 MAA battlewagons entered the town. Movement spokesman Moloud Muhammad Ramadan said the action was taken to protect village residents who were threatened by the MNLA’s presence, though there were later charges that MAA fighters looted Tuareg properties in Bir (al-Akhbar [Nouakchott], April 22). French military aircraft overflew the town several times to observe the situation, though they did not send in ground forces (RFI, April 26). As clashes between Arabs and Tuareg intensified, troops from Burkina Faso and the Malian Army entered Bir on May 6 (AP, May 7). The Arab fighters withdrew, but remained close to the town to observe developments and await an opportunity to return.

Malian troops conducted searches and carried out arrests in Bir, but they and the Burkinabe force withdrew by May 10, leaving the town open to new outbreaks of violence as a column of Arab battlewagons re-entered Bir on May 11, looting homes and shops while searching for Tuareg men. MAA spokesmen Moloud Muhammad Ramadan admitted that the Arab fighters were members of the MAA, but insisted they were operating outside the movement’s control in an effort to retrieve items looted from the Arab community in In Khalil by Tuareg members of the MNLA (RFI, May 12). The local Tuareg community claims to have had nothing to do with the MNLA looting of In Khalil. Ramadan denied charges that Tuareg livestock at Bir were slaughtered by MAA fighters and stated that the MAA “has nothing against the Tuareg, but hunts the MNLA wherever it may be” (Mali Actualités, May 5).

The trouble in Bir has its direct origin in the MNLA’s occupation of the border town of In Khalil in February, which Arab residents claim was followed by wide-scale pillaging and rape. The MAA responded by attacking the MNLA positions in In Khalil on February 23 with a column led by MAA military commander Colonel Hussein Ould Ghulam. The Arab militia was driven off after being hit by French airstrikes in support of the MNLA (Le Combat [Bamako], February 23; see Terrorism Monitor Brief, March 8).

To press their demands for the return of Arab property or cash compensation, MAA fighters kidnapped the son of the Tuareg marabout [Islamic religious scholar] of Bir, who remains missing (RFI, May 9). However, Arab elders in the town opposed the kidnapping, suggesting it would result only in more violence between the communities (RFI, April 29).

Clashes between Tuareg and Arab groups have occurred elsewhere in northern Mali as well. Arab residents of Anefis, a town roughly halfway between Gao and Kidal, complain that Tuareg fighters of the MNLA entered that town on April 24, killing four Arab merchants before cleaning out their shop and charging fees to pass through MNLA checkpoints (Procès Verbal [Bamako], May 1). It is not only the rebel Tuareg that have come into conflict with the Arabs of northern Mali; Arab residents of the town of Taguilalt (60 miles outside of Gao) have complained that Tuareg troops of the Malian Army (presumably part of Colonel al-Hajj ag-Gamou’s command) looted the village on April 16, arresting 12 Arab men and “provoking and humiliating “other Arab residents (al-Akhbar [Nouakchott], April 17). The Timbuktu Arab community is still calling for information on the whereabouts of eight Arab traders and one Songhai member who they claim were abducted by Malian troops on February 14. Malian authorities in Timbuktu claim only one Arab trader was taken (RFI, May 2).

Besides the Arab “self-defense” militias, Malian Arabs seeking reforms through legal and democratic means formed al-Karama (Dignity) last year in the Mauritanian capital of Nouakchott, where many Malian Arabs have taken refuge for the duration of hostilities in northern Mali. Though they admit they lack political experience, al-Karama leaders say they will not concede the right to govern to “cunning” and more experienced political operators who rule through “the lie, the plot and the threat” (Mali Actualités, April 12). The leader of al-Karama is Muhammad Tahir Ould al-Hajj, a leading member of the Timbuktu Arab community.  The movement’s secretary, Muhammad Ould Mahmud, insists al-Karama opposes all forms of terrorism and drug-trafficking and welcomes the recent establishment of a national Dialogue and Reconciliation Commission (Mali Actualités, May 4).

In a parallel effort to find a political solution to the situation in northern Mali, the High Council of Azawad was formed on May 2 by a number of Kidal community leaders and headed by Muhammad ag Intallah, a son of the chief of the Ifoghas Tuareg of Kidal, Intallah ag Attaher. The mainly Tuareg group says it seeks to unite all the “sons of the Azawad” under a single banner to negotiate with Bamako without recourse to armed struggle, partition or alliance with Islamist groups (RFI, May 7). However, despite accusations that the HCA is nothing more than a renamed version of the rebel MNLA, that movement has announced it wants no part of the HCA and is seeking direct negotiations with Bamako (RFI, April 26; May 8). Bamako, in turn, insists on MNLA disarmament before talks can begin. There are, however, reports that fighters of the largely Tuareg Mouvement Islamique de l’Azawad (MIA) led by Alghabass ag Intallah (another son and designated successor of the Ifoghas chief) are integrating into the MNLA. These reports would seem to confirm earlier charges that the recently formed MIA was nothing more than a way-station for Ansar al-Din defectors seeking to join the secular MNLA before direct talks resume with Bamako (RFI, April 29; for Alghabass ag Intallah and the MIA, see Militant Leadership Monitor, January 30).

The Arab-Tuareg tensions are escalating as the defeated Islamist groups turn to terrorist tactics to prolong their struggle against French “Crusaders,” their military allies and the Malian state:

Meanwhile, there are reports that the 2012 military coup leader, Captain Amadou Sanogo, is seeking asylum in Gabon or Nigeria. Sanogo, who has barely left the Kati military base outside of Bamako since the coup, is alleged to now fear reprisals from other member of the military after a number of internal clashes and disputes within the army (PANA Online [Dakar], May 1).