Ongoing Taliban military operations in northern Afghanistan were recently described by Khalid Haidari, the “official in charge of [Taliban] military affairs” in the province of Faryab, on the border with Turkmenistan (Voice of Jihad, May 17). The population of Faryab is largely Uzbek and Turkmen, with a sizeable Parsiwan minority (a Shi’a Tajik sub-group). Located far from the Pashtun-dominated regions of the south, where most Taliban operations take place, Faryab has been relatively peaceful since the 2001 U.S. invasion. Despite the lack of Pashtuns in Faryab, Haidari insists that the “mujahid people” of Faryab province have supported the Taliban both financially and with manpower. “The reality, contrary to what was in the past, is that the north is not a tranquil area for the internal and foreign enemies either.” Last year, the Taliban appointed Abdul Hamid Akhundzada as “governor” of Faryab province, but Akhundzada was soon killed in a raid by security forces after they received a tip-off regarding his location (Reuters, July 19, 2008). 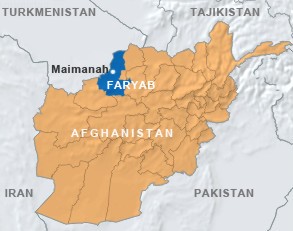 Haidari denies the Coalition claims that the north has been cleared of mujahideen, explaining that this is a routine reaction by Coalition forces when they fail to expand the areas under their control. The Taliban leader claimed to have recently inflicted a “shameful defeat” on the enemy in “face to face fighting” that has left the Coalition in a defensive state, only able to venture out of the urban areas with an escort of dozens of tanks and aircraft.

Regarding the forthcoming Afghan elections, Haidari maintains they are nothing more than “a conspiracy by the Americans. We are seriously trying to prevent them… This is because elections in the presence of invaders are a great betrayal of Islam and the homeland.” He urged all Afghans to refrain from voting or from working in the elections.

Haidari dispensed with the coming American “surge” in Afghanistan by noting that the more troops the enemy deploys, the greater the opportunity for Taliban fighters to inflict casualties. “If our faith and belief is strong and we rely on God alone, the decrease or increase in the number of foreign soldiers or their equipment will not affect our activities.”

Faryab province is in the German-controlled sector of Afghanistan, known as Regional Command North. In response to a request from the International Security Assistance Force (ISAF) last year, German forces carried out a joint operation with the Afghan army designed to flush out Taliban fighters who infiltrated Faryab and neighboring Badghis province (Deutsche Welle, May 16, 2008). The German mandate calls for military operations in Afghanistan to be of a limited nature. Another 1,000 troops are on their way to join Germany’s ISAF force in northern Afghanistan, bringing the size of the force up to 4,500 troops. Four Taliban fighters were killed in an encounter with Afghan police in Faryab on May 12 (Reuters, May 12).

This article first appeared in the June 4, 2009 issue of the Jamestown Foundation’s Terrorism Monitor