The war on terrorism is fought in Yemen in the press and courtrooms as well as in the mountains and deserts. Yemen’s president, Ali Abdullah Saleh, is a veteran political survivor, but a tug-of-war with the U.S. over a leading opposition figure accused of supporting terrorism is threatening the president’s delicate web of political alliances. 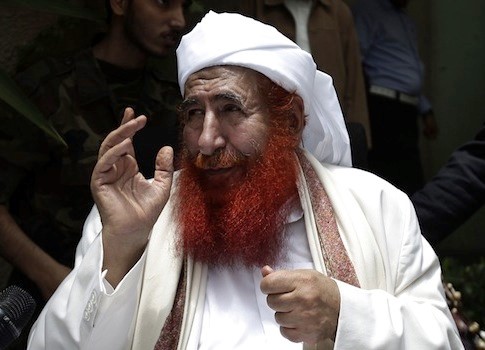 Abdul-Majid al-Zindani, a veteran of the anti-Soviet jihad in Afghanistan, was named by the U.S. Treasury Department as a “specially designated global terrorist” in February 2004. The sheikh is accused of obtaining arms and funds for al-Qaeda and acting as a spiritual advisor to Osama bin Laden. He has since been added to the UN Security Council’s list of terrorism suspects.

The 56 year-old Islamist is a powerful man in Yemen and enjoys a wide power base. He is the head of the Shura Council of the Islah Party and president of al-Iman University in Sanaa, maintaining a strong presence in both the political and intellectual life of the country. A resolution of the UN Security Council has called for the seizure of the sheikh’s assets and a ban on travel to foreign countries. Neither measure has yet been implemented in Yemen; in fact, al-Zindani accompanied Saleh to Mecca for a summit meeting of the Organization of the Islamic Conference last year, a mission noted in a recent letter from President Bush to President Saleh (published by a defense department website, 26September.com, March 4).

The letter expressed President Bush’s “disappointment” in Saleh’s handling of the al-Zindani case and expressed doubt in Yemen’s “commitment to the war on terrorism.” According to 26September, the message was followed by a telephone call to President Saleh from a U.S. anti-terrorism official who demanded al-Zindani’s arrest. Yemen is asking for more definitive proof of the sheikh’s guilt.

Al-Zindani has lately targeted three of Yemen’s journalists for offending the Prophet Muhammad by publishing the Danish cartoons. The sheikh is raising money to try the journalists, but has run into an unexpected wall of solidarity from Yemen’s journalist community. An embarrassing development was the revelation that copies of the cartoons had been made and distributed at the sheikh’s own al-Iman University (NewsYemen, March 3).

There may be deeper reasons for al-Zindani’s antagonism toward local media. The sheikh blames his problems with the U.S. on malicious portrayals in the Yemen press, invented for “political reasons.” He describes U.S. allegations of ties to terrorism as similar to the charges of Iraqi possession of weapons of mass destruction in that they lack proof or evidence (NewsYemen, March 3).

Al-Zindani is eager to avoid extradition to the U.S. and, to the surprise of many, has even publicly praised the efforts of his political rival, President Saleh, to remove his name from the U.S. list of terrorism supporters. The sheikh may already be a target of an unknown party, as an investigation has been opened into two recent incidents of alleged interference with al-Zindani’s car. In the first, a tire exploded while he was driving, and in the second a tire flew off his vehicle (Yemen Times, March 4).

One member of the Islah Party’s Shura Council, Muhammad ‘Ali Hasan al-Muayad, is already in U.S. detention after his extradition from Germany in November 2003. Demands for the arrest or extradition of al-Zindani could threaten the fragile balance that keeps President Saleh in power. While Saleh’s methods frequently puzzle and exasperate the State Department, he is still regarded as an important ally of the U.S. in the war on terrorism. President Saleh has expressed his reluctance to extradite any citizen of Yemen: “We are not the police of any other country. We are independent and have sovereignty” (Yemen Observer, March 1). It remains now to be seen if the U.S. will press the issue.

This article first appeared in the March 7, 2006 issue of the Jamestown Foundation’s Terrorism Focua