The Iraqi mujahideen are claiming that resistance engineering units have successfully “decoded” U.S. military robots designed for urban combat and turned them against U.S. soldiers. After redirecting the robots against U.S. forces, the American military was forced to withdraw the robots from service, according to the statement (Quds Press Agency, May 7). With the much vaunted robots never having seen combat service, however, it appears that the Iraqi resistance is attempting to capitalize upon unsubstantiated rumors that the robots had turned their M249 light machine guns on their U.S. operators. 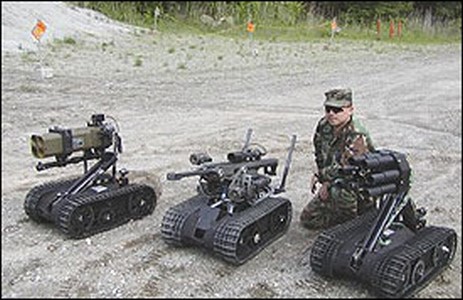 A Variety of SWORD Robots

Designed for “high-risk combat missions” in urban settings, the twin-tread Unmanned Ground Vehicles (UGV) were deployed in Iraq last June and cost $250,000 each—not including development costs—though the manufacturer states that the cost per unit could be halved in orders of 100 or more units.

The SWORD (Special Weapons Observation Remote Reconnaissance Direct Action System) robots are manufactured by Massachusetts-based Foster-Miller (owned by British Qinetiq) and were tested at the New Jersey Armament Research, Development and Engineering Center (ARDEC). SWORD is basically a modified version of Foster-Miller’s Talon bomb-disposal UGV, 2,000 of which have been delivered to the U.S. military. Robots have long been used for bomb disposal and reconnaissance, but combat-capable robots are an innovation that is being strongly pursued in Israel and the United States.

Only three of the combat robots have been deployed in Iraq. While the Army has authorized the purchase of as many as 80 of the systems, funding is currently not available (National Defense, September 2007). Most of the projected systems are committed for use by the six U.S. “Stryker Brigades,” rapid intervention forces using 8-wheeled Stryker Light Armored Vehicles. Special Operations Command has also taken an interest in further development of the SWORD robots.

The Iraqi mujahideen are unlikely to have actually been able to “decode” and reprogram the SWORD robots. Each system is equipped with deadly anti-tampering devices and there are no reports of Iraqi fighters capturing or even encountering any of the three active systems, each of which is now safely secured.

The controversy over SWORD deployment began when Kevin Fahey, the Army’s program executive officer for ground forces, stated at a RoboBusiness conference that the unit had been pulled from service before use in a combat situation as “the gun started moving when it was not intended to move” (Popular Mechanics, April 9). Fahey later clarified that SWORD was still deployed in Iraq, while a spokesman for Foster-Miller described reports of the gun moving without commands as “an urban legend” (Wired News, April 15). Apparently, only three incidents of movement without command were recorded, all minor incidents that were corrected during the testing phase. Despite the improbable claim by the Iraqi resistance, the army and the manufacturers have still not provided a full explanation of why the robots are not in use. According to Robert Quinn, an executive at Foster-Miller: “If you have a mobile weapons platform that can’t be mobile, and it becomes nothing more than a fixed position, then why not just put it on a tripod?” (National Defense, May 2008)

This article first appeared in the May 13, 2008 issue of the Jamestown Foundation’s Terrorism Focus