A police chief in the Anbar Province city of Haditha has put a name and photo to the elusive figure of Amir Abu Omar al-Baghdadi, the leader of the al-Qaeda-affiliated Islamic State of Iraq (ISI) (al-Arabiya TV [Dubai], May 7). 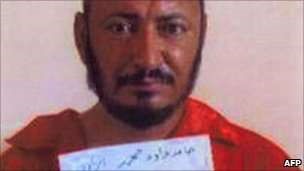 According to the police chief, al-Baghdadi is actually a former officer in the Saddam-era Directorate of General Security (al-Amn al-‘Amm) named Hamid Dawud Muhammad Khalil al-Zawi. The alleged ISI leader is said to move between Mosul, Kirkuk, Baghdad and the northern Makhmur region, where Kurds have resettled after evicting Sunni Arabs who were settled there as part of Saddam Hussein’s Arabization efforts. Al-Zawi is reported to have been dismissed from the security services before becoming a preacher in a mosque in Haditha, close to his hometown of al-Haqlaniya. He reportedly joined al-Qaeda after the U.S. invasion of 2003. Al-Baghdadi’s identity and photo were said to have been obtained from documents and computers seized in a raid on an al-Qaeda hideout in al-Haqlaniya. U.S. officials are reported to be still trying to confirm the information.

Last summer U.S. and Iraqi government forces claimed a man killed by U.S. forces (Muharib Abdulatif al-Juburi) was actually Abu Omar al-Baghdadi (al-Jazeera, July 9, 2007). A little more than a week later U.S. Brigadier Kevin Bergner declared that al-Baghdadi did not exist, based on the interrogation of an alleged senior al-Qaeda member, Khalid Khalil Ibrahim al-Mashadani. Bergner claimed al-Baghdadi’s audiotape statements were actually read by an actor (Reuters, July 18, 2007). Al-Baghdadi has made numerous audio statements since the creation of ISI, but has issued no video recordings. In March, Ahmad Salah al-Din, a spokesman for the Sunni insurgent group Hamas Iraq, insisted that al-Baghdadi was only a prop designed to put an Iraqi face on Egyptian Abu Ayub al-Masri’s al-Qaeda in Iraq organization (Al-Arab [Qatar], March 26).

The claim that al-Zawi is the real figure behind al-Baghdadi was actually first made last summer in a posting to a jihadi website (lahdah.com, July 17, 2007). The posting added that al-Zawi was born in 1958 and had worked as an oil-heater repairman after retiring from the security services. Al-Arabiya’s latest revelation came several days after a false report from the Dubai TV station regarding the alleged capture of al-Qaeda in Iraq leader Abu Ayub al-Masri.

This article first appeared in the May 13, 2008 issue of the Jamestown Foundation’s Terrorism Focus