Could a United Nations peacekeeping mission face al-Qaeda fighters in Darfur? According to Osama bin Laden, if a UN force deploys in the region, al-Qaeda will attack UN troops. On April 23, al-Jazeera television broadcast a Bin Laden audiotape in which he called for al-Qaeda fighters to begin traveling to Darfur to prepare for a “long-term war against the Crusaders,” an apparent reference to the UN force (controlled by the United States in Bin Laden’s mind) that could replace the ineffective African Union mission in the region. The commander of the United Nations Mission in Sudan has announced that the UN force is treating Bin Laden’s threat with “whole seriousness” (Sudan Tribune, April 26). The Sudanese government is doing everything possible to prevent a large-scale UN deployment in Darfur, but this sudden offer of al-Qaeda assistance is surely unwelcome in Khartoum. 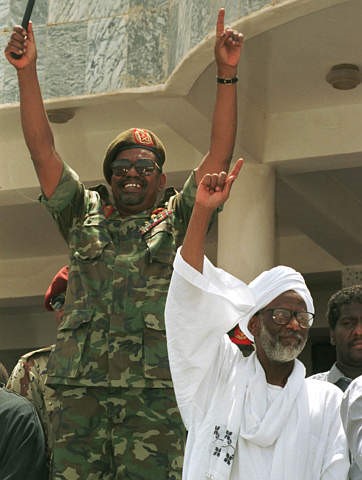 Bin Laden’s presence in Sudan from 1991 to 1996 was enabled by Hassan al-Turabi, the country’s leading Islamist, widely regarded at the time as the real (and unelected) power behind the presidency. Times have changed in Sudan, however. Al-Turabi’s influence on the government waned long ago. His one-time deputy has usurped his position, and al-Turabi has spent most of the last few years in prison or under house arrest. To add to his woes, he has been accused of heresy for his recently declared liberal views on the role of women in Islamic society. Al-Turabi made many enemies in his ruthless pursuit of an Islamic state in Sudan, and they will surely now circle in to take their revenge. The government has seen changes as well; under the provisions of the peace treaty with the South, Southern Sudanese Christians now occupy leading positions in the administration. They are no fans of al-Qaeda.

Most Sudanese do not admire the Wahhabist-style Islam espoused by al-Qaeda. Their Islam is based on the proud Sufi lodges, whose form of worship is violently opposed by al-Qaeda. While al-Turabi and others have had some success in their efforts to radicalize the population, most local Muslims will tell you that Sudanese Islam is in no need of improvement by outsiders. Not everyone in the Khartoum regime shared al-Turabi’s fondness for al-Qaeda. When Bin Laden was in Sudan, the suspicious Mukhabarat (secret service) took note of every move and utterance by Bin Laden and his associates. Attempts were made to turn thousands of pages of intelligence over to the United States after Bin Laden was deported in 1996, but the Clinton administration refused to have anything to do with a “state sponsor of terrorism.”

Despite his sojourn in Sudan, the al-Qaeda leader appears poorly informed about the country. He describes the conflict in Darfur as tribal differences cleverly manipulated by the United States to “send crusader troops to occupy the region and steal its oil under the guise of preserving security there.” In doing so, Bin Laden ignores all the environmental, economic, political, ethnic and religious factors behind the current war. His suggestion that “crusader” forces are trying to “steal” Darfur’s oil resources under the pretext of peacekeeping is absurd. Sudan’s main oil industry is located in Upper Nile Province and is already owned by a Chinese-Malaysian consortium. It will take much more than a peacekeeping force to change that. The Sudanese/Swiss ABCO corporation claims that preliminary drilling in Darfur revealed “abundant” reserves of oil, but it appears that the rights may have already passed into Chinese hands (AlertNet, June 15, 2005; Guardian, June 10, 2005).

China has emerged as the Sudanese regime’s protector on the UN Security Council, and may use its veto to prevent the formation of a UN force in Darfur. China has been quietly active in Sudan for decades, developing a close relationship with the current regime. Sudan already provides 10 percent of China’s petroleum imports. Any attempt by the “crusaders” to bring Sudanese petroleum reserves under Western control could cause friction with China.

Bin Laden also claims that the Sudanese government has abandoned Shari’a law, which is surely news to everyone in Sudan. His assertion that the southern separatist/nationalist movement was sponsored by Great Britain after independence defies historical reality. Ironically, in view of his own failure to grasp regional issues, Bin Laden calls on the mujahideen to learn everything they can about Darfur, for “it has been said that a man with knowledge can conquer land while land can conquer the ignorant.”

One of the two main Darfur rebel groups, the Islamist Justice and Equality Movement (JEM), is allied with al-Turabi, yet even they have rejected Bin Laden’s appeal. A JEM spokesman declared that “Bin Laden is still preaching the theory of an American-Zionist conspiracy when the real problem comes from Khartoum, which is a Muslim government killing other Muslims” (Sudan Tribune, April 23). JEM’s rival group of rebels in Darfur, the much larger Sudan Liberation Army (SLA), has gone even further, declaring that Bin Laden’s intent is to “exterminate the peoples of Darfur.” The Sudanese government dismissed Bin Laden’s appeal, announcing that Sudan would not play host to terrorists. Government spokesmen also declared that a decision to replace African Union forces with UN troops “is not going to be imposed on Sudan” (Sudan Vision Daily, May 8).

The regime of President Omar al-Bashir has bought time to implement its Darfur policy by aligning itself closely with the United States in the war on terrorism. Sudanese intelligence provides valuable information to U.S. security services, knowing that the U.S. desire to protect its homeland overrides human rights concerns in distant states. It is a calculating approach that requires considerable finesse, taking what one can, but never going too far. Allowing al-Qaeda back into the country is not just a step too far, but a jump into the volcano, particularly at a time when Washington appears to be taking a harder line on Khartoum.

With desertification sterilizing the traditional grazing lands of the Darfur nomads who supply the bulk of Janjaweed manpower, it will prove nearly impossible to cast the militias and their families back into the desert, regardless of their crimes. Some Janjaweed leaders (like Shaykh Musa Hilal) are already appealing for peace in the interests of consolidating their gains. In the meantime, discipline is breaking down in the African Union force, which has not been paid in two months (Daily Trust, Abuja, May 8). The commander of the AU troops, Major General Collins Ihekire, has called for a quick deployment of UN troops to reinforce the AU mission, whose mandate has been extended until the end of September (IRIN, May 9).

Sudanese President Omar al-Bashir has displayed little interest in exporting Islamic revolution beyond Sudan. That was al-Turabi’s mission, and the president has already threatened to execute him. Similarly, al-Bashir has no interest in hosting a group of armed foreign Islamists who could threaten his regime and whose presence would isolate Sudan internationally. Bin Laden’s declared aim of disrupting the North-South peace agreement is completely at odds with the aims of the regime. Sudan is exhausted by war, and there is oil to be pumped from the wells of the South. The abandonment of the Sudanese government’s jihad in South Sudan was recognition that war is bad for business.

Bin Laden qualified his offer of support by noting that it was not his intention to defend the Khartoum government, for “even though our interests may be mutual, our differences with it are great.” How can Bin Laden send fighters to aid a regime that he just announced he does not particularly support? What does Bin Laden expect will happen to them once they arrive? If this message is genuinely from Bin Laden, it suggests that the terrorist leader is desperately searching for a cause to sustain his movement. There is a crime in Islam called fitna; it means creating discord among Muslims, and it is one of Islam’s greatest offenses. Bin Laden apparently believes that sending Muslims to disrupt peace treaties negotiated by (and between) other Muslims is a suitable aim for his movement. With or without the peace treaty in the works in Abuja, neither Sudan’s government nor the Darfur rebels desire the assistance of al-Qaeda. Should Bin Laden’s followers head to Darfur, there is no doubt a hot reception awaits them.

This article first appeared in the May 18, 2006 issue of the Jamestown Foundation’s Terrorism Monitor