South Sudan’s opposition movement welcomed news of the outbreak of a fresh rebellion in Western Equatoria State’s Maridi County in late January/early February. A new rebel movement going by the name Revolutionary Movement for National Salvation (REMNASA) announced its presence through an attack on SPLA troops in Maridi County, claiming to have killed six soldiers (Sudan Tribune, January 30, 2015; February 3, 2015). The movement is allegedly led by Major Losuba Lodoru Wongo, a young British-educated officer who was considered one of the more promising lights in the SPLA officer corps before taking some 100 to 200 of his men with him into the bush. 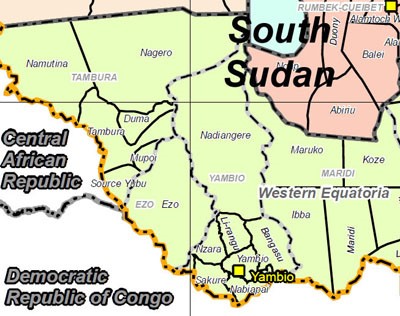 Western Equatoria, with Maridi County in the lower right

Although Loduru’s defection was confirmed by the SPLM Defense Minister, Western Equatoria State governor Joseph Bakosoro has since questioned the existence of both the rebellion (which he claims to have only heard about from the media) and of Major Lodoru himself (Radio Tamazuj, February 23, 2015). Maridi County borders unsettled regions of the northeast Democratic Republic of the Congo (DRC) that provide refuge for various insurgent groups. Government authority in parts of Western Equatoria is weak and much of the work of defending local communities from cross-border marauders like the Lord’s Resistance Army in recent years has fallen to local self-defense groups armed with spears and bows and arrows.

Regardless of whether a rebellion in Western Equatoria gains steam or not, it is yet another warning that the main parties in the South Sudan conflict are running out of time to resolve their differences before the region plunges into yet another decade or two of inter-communal violence the young nation cannot afford.