The Salafist war on the physical legacy of Sufi Islam has opened a new front in the northern Malian city of Timbuktu, home to a number of ancient mosques and the famous tombs of 333 Islamic “saints.”

The May 5 attack on the tomb of Sidi Mahmud Ben Amar (1463-1548) confirmed the fears of many in Mali that the Salafist Ansar al-Din occupiers of Timbuktu would turn their energies towards the destruction of the city’s religious heritage. The attackers prevented worshippers from approaching the tomb before tearing off its doors, breaking windows and setting flammable portions on fire. One man who attempted to stop the destruction was bound and forced into a car (al-Jazeera, May 7). The men were reported to have told shocked onlookers: “What you are doing is haram! [forbidden]. Ask God directly [for intervention] rather than the dead.” Before leaving they promised to destroy other tombs in the city (Reuters, May 5). An Ansar al-Din spokesman described the leader of the attack as a “new member” of the group (a Mauritanian according to some sources) and suggested that his actions would be investigated (al-Jazeera, May 7).

Sidi Mahmud Ben Amar (1463-1548) was from a family of Godala Berbers from the Atlantic coast of Mauritania. He achieved fame as a qadi (Islamic judge) and his tomb in Mauritania became a major site of pilgrimage after his death. Sidi Mahmud was attributed with many miracles during his lifetime and his descendants were renowned as Islamic scholars, especially his nephew Ahmad Baba al-Doudani, whose tomb is one of the most important Islamic sites in Timbuktu. Sidi Mahmud’s tomb is classified as a UNESCO world heritage site, one of 16 such sites in Timbuktu. Mali’s military government responded to the unprecedented attack by issuing a statement on national television that condemned “in the strongest terms this unspeakable act in the name of Islam, a religion of tolerance and respect for human dignity” (Reuters, May 5).

A local official told the French press that the Salafists have promised to destroy other tombs as well as take possession of the collection of manuscripts accumulated during the city’s days as Africa’s most famous center of learning (AFP, May 6). Many of the estimated 100,000 invaluable mediaeval manuscripts kept in Timbuktu are reported to have been removed to private homes for safekeeping until the Salafist occupation of the city ends (Asia Times, May 9). Written both in Arabic and Fulani, the manuscripts cover aspects of science, the arts and theology.

Though many commentators refer to Sufi Islam as the “peaceful, moderate and mystical” face of Islam, it was in fact the Sufist trend that was the greatest proponent of armed jihad before the 20th century, particularly in the Sudanic belt of Africa. In the late 20th and early 21st centuries, however, it is the Salafist trend that has become most closely identified with jihad through its resurrection of the thought of Shaykh Ibn Taymiyya (1263-1328). 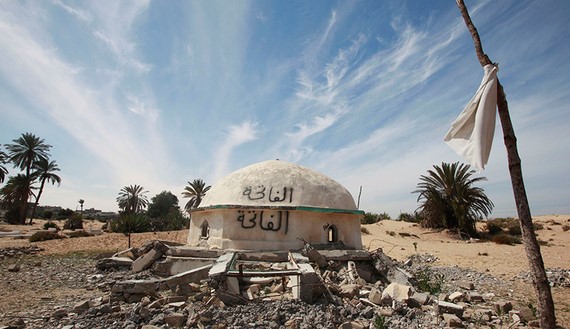 The attack in Timbuktu is just part of a growing trend towards the Salafist destruction of Sufi shrines and monuments:

This article first appeared in the May 18, 2012 issue of the Jamestown Foundation’s Terrorism Monitor