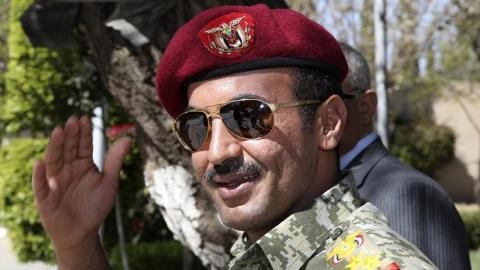 News of Ali Muhsin’s defection to the Yemeni opposition on March 21 took many by surprise, not least President Ali Abdullah Saleh, the General’s half-brother. Before his defection to the opposition, General Ali Muhsin was commander of the Northwestern Military Region and commander of the First Armored Division. Widely viewed as one of the most important figures in Yemen’s military and known for his contacts with the Islamist Islah (Reform) Party and the Muslim Brotherhood, the defection of this consummate regime insider was viewed with both hope and suspicion by various opposition members.
According to Ali Muhsin:

The fact is that the al-Qaeda organization served the objectives and aims of Ali Saleh… al-Qaeda took advantage of the state’s weakness and its reluctance to act against them and curb their activities since Ali Saleh wanted to use al-Qaeda as a scarecrow for the outside parties. Everybody will realize after Salah’s departure that the legend of al-Qaeda in Yemen was exaggerated. When Yemen moves to a modern civil state – when the law prevails and justice and equal citizenship are ensured, when the judiciary becomes clean and the national economy becomes firm, developed and successful – al-Qaeda will have no presence in Yemen… The terrorist groups he uses to scare Yemen and the outside world with are supervised by the sons of his brother and the commander of his personal guards, Tariq Muhammad Saleh, and the Deputy of the National Security Apparatus, Ammar Muhammad Saleh.

The general went on to claim al-Qaeda elements were allowed to enter the southern town of Zanjibar without resistance on May 27 to seize weapons belonging to the police and army garrison. Nine dissident generals, including Ali Muhsin, released “Statement Number One,” in which the generals accused the President of “surrendering Abyan [Governorate] to an armed terrorist group” and called on the rest of the army to join “the peaceful popular revolution” (iloubnan.info – May 29, 2011; AFP, May 29).

. Ali Muhsin has survived a number of assassination attempts and some local observers have suggested a struggle for the succession has been ongoing for some time between the general and the president and his son Ahmad Ali, head of the Republican Guard (Yemen Tribune, October 9, 2009). According to a Wikileaks cable from the U.S. embassy in Sana’a, President Saleh tried to have the general killed by asking Saudi Arabia to bomb a compound in northern Yemen that was actually being used by the general as a field headquarters. The Saudis sensed something was wrong with the request and failed to carry out the raid (al-Jazeera, June 5).

There are suspicions that the General’s defection was only part of a strategy to create a favorable post-Saleh environment for Ali Muhsin, possibly as the new head of the military council (al-Jazeera, June 11). Ali Muhsin himself says that, at age 70, he has no personal ambition to rule Yemen. The general says President Saleh “still heaps unjust accusations against us for no reason other than that we in the armed forces announced rejection of any orders to attack the people, because we told him ‘the people demand that you leave so depart safe and sound for there is no need to spill blood and mire Yemen into anarchy and civil war.’”

Ali Muhsin has deployed his forces to defend the compound of Vice-President Abd-Rabbu Mansur Hadi, a southerner from Abyan province who was appointed in 1994 as a symbol of north-south unity. There were reports last week that elements of the 1st Armored Division repelled two attacks against the vice-president’s house by tribesmen on June 6 (al-Sahwah [Sana’a], June 7). The vice-president is nominally in charge with President Saleh out of the country, but it is Saleh’s son Ahmad Ali who has moved into the presidential palace and is viewed to have control of the government. Troops under Ali Muhsin’s command are also reported to be preparing defensive positions in Sana’a in preparation for an expected confrontation with forces still loyal to the Saleh regime (Naba News, June 7). While his troops prepare for action, Ali Muhsin was reported to have met with the U.S. and EU ambassadors in Sana’a (Ilaf.com, June 9).

This article first appeared in the June 17, 2011 issue of the Jamestown Foundation’s Terrorism Monitor