Once a main pillar of support for the regime of Yemeni president Ali Abdullah Saleh, much of Yemen’s Hamid tribal confederation has now come out in open confrontation to Saleh’s teetering government.  Complicating the new political alignment is the fact that President Saleh and his clan belong to “the people of al-Ahmar,” the most powerful family in the Hashid confederation. The leader of the Hashid, Shaykh Sadiq al-Ahmar, recently told a pan-Arab daily of the reasons for the Hashid’s political turnabout and described a path out of the current turmoil, while advising President Saleh not to return from his current hospitalization in Saudi Arabia. 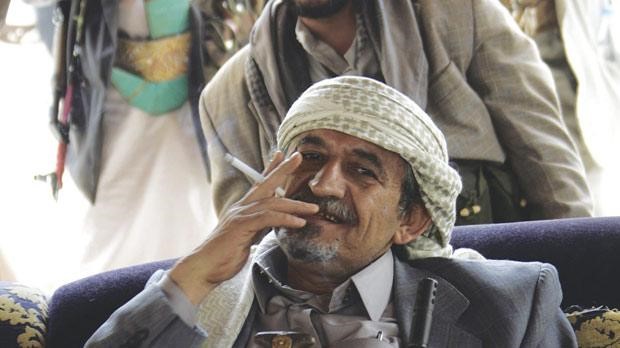 Shaykh Sadiq is the oldest of ten sons of the late Shaykh Abdullah bin Hussein al-Ahmar (d. 2008), the former Hamid chief, Speaker of Parliament and a consistent supporter of the Saleh regime. In February, Shaykh Sadiq resigned from the ruling General People’s Congress.  By March 20, Sadiq was calling for the president to resign from office peacefully (al-Jazeera, March 20).

While describing the support of the Hashid and other Yemeni tribes for the “Yemeni people’s peaceful revolution,” Shaykh Sadiq acknowledged that many of the Hashid continue to support the regime: “There are always individuals benefiting from the regime and its gifts and they are from the Hashid and other tribes.” As for those who have taken lives to defend the regime: “The blood is not forgotten until the killers are punished or pardoned by the victims’ families. Those involved are known to the Yemeni people.”

Nevertheless, Shaykh Sadiq asserts that the anti-regime protests are “a popular youth revolution and [an expression of] divine will.” He praised the discipline of the young people and tribesmen (who have ample access to weapons) in confronting the regime’s violent acts of repression “with bare chests.” However, Shaykh Sadiq has not hesitated to support the “peaceful revolution” with armed force when required. On May 24, intense fighting broke out in the al-Hasbah neighborhood of Sana’a between the shaykh’s tribal supporters and elements of the loyalist Republican Guard. The government responded to the clashes by issuing arrest warrants for all ten al-Ahmar brothers on charges of treason (al-Jazeera, May 26).

According to Shaykh Sadiq, the Hashid confederation abandoned its support of the president and his ambitious son, Ahmad Ali Saleh (commander of the Republican Guard) after it became apparent the regime was prepared to spill the blood of peaceful demonstrators to ensure the succession of the latter. This ended the sharat Mu’awiyah (Covenant of Mu’awiyah) between the Hashid leadership and the regime, which was intended to guarantee that the President’s son would not succeed him, much as the original covenant called for Mu’awiyah (602-680), the first Caliph of the Ummayad Dynasty, to refrain from appointing his son Yazid as his successor (a pledge the Caliph broke).

Threats to Yemen’s integrity from Southern secessionists and al-Qaeda militants were downplayed by the tribal leader in words that echoed accusations leveled by defecting General Ali Muhsin al-Ahmar last week: “There are no fears of secession in Yemen or fears from al-Qaeda. All these are tribulations planned and propagated by the regime which turned them into a bogey.” The shaykh also believes that the political change promised by the revolution will succeed in meeting the demands of the Houthi rebels of north Yemen, as they are no different than the calls of other Yemenis for “stability, justice, security and development.”

Shaykh Sadiq would prefer to see a solution to the political crisis through the use of constitutional means (i.e. the succession of Vice President Abd-Rabbu Mansur Hadi in the absence of the president), rather than the establishment of a transitional council. Of the vice-president, a southerner who is unrelated to the governing clan, Sadiq says “all the Yemeni people’s sons and forces are with him. But it seems he is hesitant and we do not know the reason for his hesitation. We are in contact with him, support and back him if he leads Yemen to the shores of safety at this critical stage.”

The shaykh concluded by advising President Saleh not to return to Yemen: “If it does happen… the clashes will increase and the cycle of violence and killing between the Yemenis will widen.”

This article first appeared in the June 23, 2011 issue of the Jamestown Foundation’s Terrorism Monitor.