The new friendship between Chad and Sudan has led to the complete collapse of the once powerful Chadian armed opposition, which was reliant on Sudanese bases and assistance. The collapse comes as part of a major security restructuring in the Chad-Sudan-Central African Republic region, one that will help enable Khartoum to focus on the South Sudan as the January 2011 South Sudan independence referendum draws near. 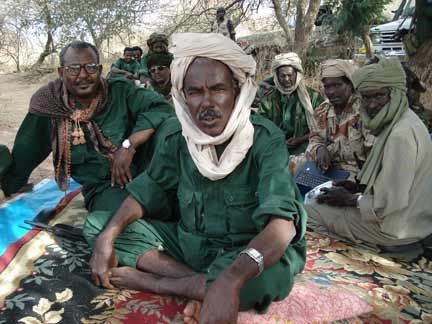 With last year’s rapprochement between Khartoum and N’Djamena came new joint border patrols that put an effective end to cross-border operations by Chadian rebel groups. Union des Forces de Résistance (UFR) spokesman Abderahman Koulamallah acknowledged that the movement’s armed presence in Sudan was “a matter of longstanding concern for Sudanese authorities,” adding that UFR forces would leave their bases in Sudan voluntarily “because of the friendly ties that bind us” (Afrol News, October 4). Nevertheless, Khartoum encouraged their departure by expelling their leaders to Doha and restricting access to local markets. In these conditions, Koulamallah announced the willingness of the UFR to hold immediate and unconditional talks with the Déby regime, saying, “It is time that the leaders of the armed opposition and those in government meet as soon as possible. This is a new step since we are calling for a dialogue without condition. We believe that the reconciliation with Sudan was one thing and the reconciliation between Chadians is another. We are awaiting the Chadian government’s response” (Radio France Internationale, October 20).

General Mahamat Nouri, leader of the Alliance nationale pour le changement démocratique (ANCD) and the Union des forces pour la démocratie et le développement (UFDD) coalition, opposed the disarmament of his forces, but could do little about it, after being expelled to Doha, other than offer the hope that his fighters would be granted refugee status rather than returned to Chad (L’Observateur [N’Djamena], September 30; PANA Online, September 7). There were fears in the ANCD that President Déby had demanded the extradition of some 30 ANCD leaders, though authorities in N’Djamena later denied this (Radio France Internationale, September 27). Timane Erdimi’s UFR agreed to disarm and return to Chad in mid-October, though some have vowed to establish new bases in the Central African Republic (CAR) (Afrol News, October 11; for Erdimi and the UFR see Militant Leadership Monitor, July 30).

There are reports that Chadian rebel Adam Yacoub, a former military commander in the UFR, has crossed into the CAR with fighters under his command (Sudan Tribune, September 27). Many UFR fighters had planned to move to the CAR, but the border was better patrolled than expected and hoped-for assistance from the Sudanese government in making the move failed to materialize (Afrol News, October 4).

With their leaders gone, discipline began breaking down in the remaining formations of opposition fighters. Near the North Darfur town of Kutum, Chadian fighters were accused of raping local women, terrorizing farmers, preventing the harvest from being brought in and threatening people with their weapons (Radio Dabanga, October 1).  In the Wadi Saleh district of West Darfur, Chadian rebels entered the town of Garsila with the intention of liberating two of their leaders who had been arrested after refusing to order the fighters to disarm (Radio Dabanga, October 21).

Many of the rebels have chosen to return to N’Djamena and take advantage of an amnesty being offered by President Idriss Déby. Most UFR fighters assembled in the North Darfur capital of al-Fashir to be returned in five batches with the cooperation of officials from the Chadian government and military (Sudan Tribune, October 12).

The UN’s Mission des Nations Unies en République Centrafricaine et au Tchad (MINURCAT), which has provided security along Chad’s borders with Darfur and the CAR since 2007, ended military operations on October 15 in preparation for a full withdrawal by the end of the year at the request of the Chadian government (UN News Service, October 20). As the UN forces prepare to depart, regional solutions to the continued insecurity caused by groups like the Lord’s Resistance Army (LRA) are being developed. A mid-October meeting in Bangui, the capital of the Central African Republic (CAR), resulted in a commitment from Uganda, Sudan, the CAR and the Democratic Republic of the Congo (DRC) to create a joint operations center responsible for enabling the effective exchange of intelligence (Daily Monitor [Kampala], October 19).

Sudan is also forming a joint border patrol with the CAR to monitor the movements of Chadian and Sudanese rebels moving to the region. According to Colonel Fatah al-Rahim Abdalla Sulayman, the commander of Sudanese forces operating in the area, a military protocol has already been signed between Bangui and Khartoum with some elements of the new border force already active (SUNA, September 26; Sudan Tribune, September 27). 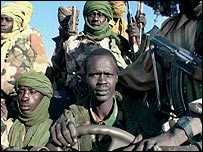 The establishment of the joint border patrol with Chad gave Khartoum a chance to find a useful role for Minni Minawi’s faction of the rebel Sudan Liberation Army (SLA), which abandoned the rebellion in Darfur in 2006 to join with the Khartoum government. Since then, Minawi’s group has suffered from extensive desertions as it was put to work fighting former comrades and fellow tribesmen in Darfur. The joint border patrol had a recent success with the liberation of a kidnapped Chinese engineer who had been seized in northern Darfur by Chadian gunmen from Ennedi, close to the Sudan border (AFP, September 17; Radio France Internationale, September 15).

With the resolution of Chad’s long-standing dispute with Sudan and the dispersal of the armed opposition, President Déby has been displaying a newfound confidence that extends to risking the departure of French military forces in N’Djamena (Opération Epervier) by demanding rent for facilities used by the French. The French forces (which include three Mirage 2000 warplanes) have ensured the survival of the Déby government by providing intelligence and logistical support in the regime’s struggle with rebel forces. French military medical teams also provide free surgical and dental operations to Chadian citizens, but the entire force has the option of moving to Gabon if Déby’s demands prove excessive (Jeune Afrique, September 3). Legislative elections are scheduled to be held in Chad on February 5, 2011 with a presidential poll set to begin on April 3.