Sudan’s leading opposition figure, Umma Party leader Sadiq al-Mahdi, has been increasingly vocal in recent weeks as public dissatisfaction grows in North Sudan over the role of the ruling National Congress Party (NCP) and its leader, President Omar al-Bashir, in losing the oil-rich South Sudan in a referendum on secession. 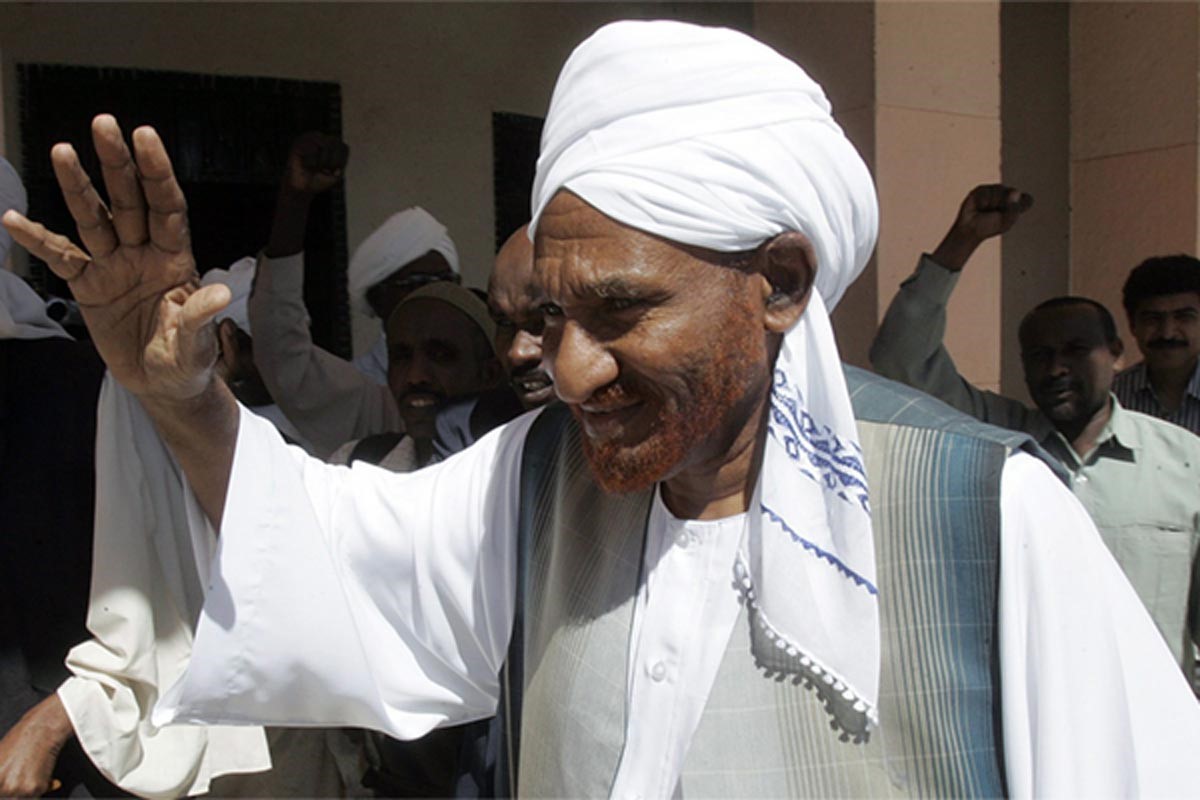 In a recent interview with a pan-Arab daily, the former Prime Minister and hereditary leader of the Sufi “Ansar” (Helpers) of the western and central Sudan rejected the method of “direct individual violence” adopted by al-Qaeda. Sadiq gives three reasons used to justify extremist violence:

While Sadiq acknowledges that these problems must be dealt with even by “Islamic Centrists” such as himself, he rejects al-Qaeda’s approach while questioning the perception of al-Qaeda as an hierarchical organization with a central leadership:

“Many people believe that al-Qaeda is an organization; however, my opinion is that al-Qaeda is a mentality, and according to this mentality some people act in a decentralized way. It is not necessary that instructions come from al-Qaeda’s leadership. There is a mentality based on Islamic interpretative judgment, which in its turn is based on the implementation of these rulings, and anyone who does not agree to this is considered an infidel, whether he is a Muslim or non-Muslim; also [shedding] the infidel’s blood is allowed.”

Al-Mahdi has joined several other opposition leaders in giving the NCP government a January 26 deadline for the formation of a national unity government. The day was selected as the anniversary of the triumph of Sadiq’s great grandfather, Muhammad Ahmad al-Mahdi, over Turco-Egyptian forces in Khartoum in 1885. The national unity government is required to negotiate relations with the new South Sudanese state and to resolve the Darfur issue and the arrest warrant of the International Criminal Court (ICC) for Sudanese President Omar al-Bashir on related war crimes charges: “The ICC issue has to be dealt with on a rational basis and not superficially by thinking that it can be ignored, and that it will be resolved and pass on its own.” The Sudanese President was succinct in his response: “Whoever wants to overthrow the government can lick his elbow….. There will not be a national government” (Sudan Tribune, December 28, 2010).

Sadiq also criticized the United States for its support of Southern independence while ignoring the development of democracy in the North:

I believe that there is a fundamental dysfunction in the United States. The foreign policy is drawn up by “lobbies,” and what these “lobbies” believe influences the policy of the U.S. Administration. “The lobbies” in existence today are interested in conducting the referendum and the birth of the South State without enough interest in what happens in the North State. This is despite the fact that any rational thinking considers it to be extremely necessary for the North State itself to be rational so that it does not contain any tendency to sabotage the South State.

The former prime minister went on to suggest that after the “failure of its policies” in Iraq and Afghanistan, the United States wants to present the secession of the South as “an achievement of its foreign policy.” He fears that U.S. support for secession has taken little account of the need for the new state to exist in peace with North Sudan. “The United States ought to understand that the referendum cannot be allowed to be a cause for new wars,” Sadiq stated.

Looking at the ruling National Congress Party (NCP) of Omar al-Bashir, Sadiq suggests that the party no longer speaks with one voice, with leading members advocating everything from wanting to get rid of the South to more effectively Islamize the rest of the nation, to those who declare the Muslim signatories of any peace treaty with the South to be infidels. “The NCP is close to becoming a ‘vehicle of convenience’ and not an institution; each passenger speaks in his own language.”

However, Sadiq says that he does not regard al-Bashir as an extremist, but notes that “he can become enthusiastic. It is extremely possible that there are groups that have exerted pressure in this direction [i.e. religious extremism], and he responded to them.”

Mubarak al-Fadl, Sadiq’s cousin and leader of the Umma Reform and Renewal Party (URRP), was even more direct in his criticism of the NCP, saying it now feared a popular uprising in the North after using most of its oil wealth for “security and political functions”; “The National Congress Party is just using religion to support the police state and step up the oppression of the population… Al-Bashir is a military man who swore an oath to preserve the territorial integrity of Sudan and now he has to let the South go away. He cannot swallow that” (Sudan Tribune, December 21, 2010). Al-Fadl’s opposition to the NCP began in 2004 after he was removed from his post as a presidential adviser. Though he has often clashed with his cousin Sadiq (much of Khartoum’s political elite is related through blood or marriage), al-Fadl announced the dissolution of the URRP on the last day of 2010, saying he would now integrate his party with that of Sadiq Umma.

This article first appeared in the January 20, 2011 issue of the Jamestown Foundation’s Terrorism Monitor