The bombing of a famous Peshawar shrine dedicated to a local Sufi saint is the latest episode of what appears to be an effort to define a new ethnic and religious identity in the northwest frontier region of Pakistan. The March 5 attack on the mausoleum of Rahman Baba, the most famous poet of the Pashto language and a major figure in the Pashtun cultural heritage, caused severe damage after explosives were lodged against the shrine’s pillars (The Nation [Islamabad], March 10). The bombing occurred the same day as a rocket attack on the shrine of Bahadur Baba in the Nowshera District of the NWFP, 40 km north of Peshawar (Daily Times [Lahore], March 10). Militants had warned the custodians of both shrines against the Sufi tradition of praying to the dead saints, a practice viewed as heresy by the Salafists, whose Saudi-influenced concept of monotheism excludes any intercession with God by revered Islamic figures, including the Prophet Muhammad. 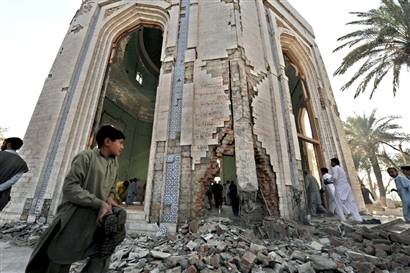 Bombing Damage to the Mausoleum of Rahman Baba

The attack on the Rahman Baba mausoleum is believed to be the work of the Lashkar-i-Islam, a Salafist militant group responsible for previous attacks on Sufi shrines, including the March 4, 2008, rocket attack on the 400-year-old Abu Saeed Baba shrine in the Khyber Agency that killed ten people. Rahman Baba was an 18th century poet whose work espoused the virtues of love and tolerance. His shrine has been a center for devotional Sufi music and singing by the Pashtun communities of Afghanistan and Pakistan since his death. Ten years ago, the Arab and Pashtun students of a new Saudi-funded Wahhabi madrassa down the road from the shrine began taking it upon themselves to prohibit traditional Sufi activities at the shrine as “un-Islamic.” Frequent assaults on visitors to the shrine have caused a significant drop in visits.

The leader of the nearby Haqqania madrassa outlined his objections to Sufi attendance at the Rahman Baba shrine: “We don’t like tomb worship. We do not pray to dead men, even the saints. We believe there is no power but God. I invite people who come here to return to the true path of the Qur’an. Do not pray to a corpse: Rahman Baba is dead. Go to the mosque, not to a grave” (Pakistan Observer, March 8). The local Salafists appear to have been particularly enraged by the tradition of female Sufis singing at the shrine and attempted to impose a ban on all visits by women (The Hindu, March 9).

There have been other attacks on Muslim shrines in the Peshawar area in the last two years, including the December 2007 bombing of the shrine of Abdul Shakur Malang Baba and the attempted destruction of the shrine of Ashaab Baba just outside Peshawar in 2008 (Daily Times, March 10). Sufi shrines attended by both Sunnis and Shiites have in the past been special targets of those seeking to promote sectarian strife in Pakistan. A bombing at the shrine of Pir Rakhel Shah in March 2005 killed at least 50 people on pilgrimage; two months later a suicide bombing at the Bari Imam shrine outside Islamabad killed 25 and wounded over 200 (Himalayan Times, March 20, 2005; AFP, May 29, 2005). The Salafist campaign of tomb destruction has brought the Taliban and other Salafi Islamist groups into conflict with the descendants of Sufi saints who wield considerable political power in Pakistan (The Nation, March 10).

Large protests followed the most recent attacks, which had cross-border repercussions in Afghanistan and India. President Asif Ali Zardari has announced the federal government will assume responsibility for rebuilding the shrine of Rahman Baba, while the Kakakhel tribe has said it will undertake the reconstruction of the Bahadur Baba shrine (The News [Islamabad], March 7; March 10). The practice of destroying the tombs of Sufi saints has also been adopted by the radical Islamist al-Shabaab movement in Somalia, costing them considerable support in that traditionally Sufi nation.