Not far from the site of a disastrous encounter with Afghan insurgents last year, French forces have now mounted an offensive to clear the strategic Tagab valley of Taliban and Hizb-i-Islami fighters. An important mission lies behind “Operation Avalon” – the construction of a new road through the valley as part of a larger effort to create secure supply routes for NATO forces in Afghanistan. The operation is being carried out by the newly created Task Force La Fayette (TF La Fayette).

The French forces include roughly 700 men from the 3e Régiment d’Infanterie de Marine (3e RIMa), with smaller units from the 2e Régiment Étranger d’Infanterie (Foreign Legion). In recent years the 3e RIMa has taken part in operations in Chad, the 1991 Gulf War, Yugoslavia, Rwanda, Albania and the Central African Republic. The French troops are accompanied by 100 men of the Afghan National Army (ANA) with air support from French and American attack helicopters. The advancing troops have been met with sniper fire and rocket-propelled grenades. A November 15 Taliban rocket attack on the town of Tagab killed three people and wounded dozens more only 300 meters from a meeting between Task Force commander General Marcel Druart and a group of tribal elders (Radio France Internationale, November 15).

TF La Fayette operates from four forward bases in Kapisa and Surobi provinces, with support detachments in Kabul. Most operations are conducted jointly with ANA units. With a command post at Nijab, TF La Fayette is composed of two Groupements tactiques interarmes (GTIA); GTIA Kapisa (currently drawn largely from Foreign Legion infantry, armor and engineering units) and GTIA Surobi (currently drawn largely from Marine infantry and artillery units). The Task Force also includes a command and support battalion in Kabul and a battalion of 11 helicopters based at Kabul International Airport. Within the task force’s zone of operations, French Operational Mentoring and Liaison Teams (OMLT) are attached to units of the 3rd Brigade of the ANA’s 201st Corps.

The French Deployment in Afghanistan

French military involvement in Afghanistan began in late 2001 with the arrival of French Special Forces and the nuclear-powered aircraft carrier Charles de Gaulle. The first French Special Forces unit to deploy was the 13e Régiment de Dragons Parachutistes (13e RDP), specializing in long-range reconnaissance missions. The 13e RDP was soon joined by the 1er Régiment de Parachutistes d’Infanterie de Marine (1er RPIMa), the other component of the Brigade des Forces Spéciales Terre (BFST), the French army’s Special Forces component. The 1er RPIMa began its existence as a Free French unit of the British Special Air Service (SAS) during World War II. Other French troops began to deploy in 2002 and formed the Kabul Battle Group in 2003. To date, 36 French soldiers have died in Afghanistan.

An air transport detachment is based at Dushanbe in Tajikistan. Security for French air operations in Dushanbe is provided by the Commandos Parachutistes de l’Air no.10, specially trained in assaulting or defending airfields. In October, Spain and France were forced to relocate supply aircraft and personnel from the Manas base in Kyrgyzstan when permission was withdrawn after the expiration of an earlier agreement. The French aircraft and personnel were transferred to the airbase at Dushanbe (AFP, October 25). France also operates a detachment of drones based at Bagram air base. The drones provide surveillance and reconnaissance services, mainly in northeast Afghanistan.

The French military in Afghanistan works closely with reconstruction teams in developing their area of operations. According to the commander of the 3e RIMa, Colonel Francis Chanson, “Success in Kapisa will hinge on development more than the destruction of insurgents… I’m not trying to gain their heart, but their confidence” (Stars and Stripes, October 31).

Last August French troops in the Surubi district of Kabul province were hit by a massive combined Taliban/Hizb-i-Islami ambush that left ten French soldiers dead and 21 wounded. A political firestorm followed in France amidst allegations of inadequate planning, possible Taliban execution or mutilation of French prisoners and a Paris Match interview with the Taliban commander who led the ambush, complete with photos of Taliban fighters wearing the military equipment and personal effects of dead French soldiers. 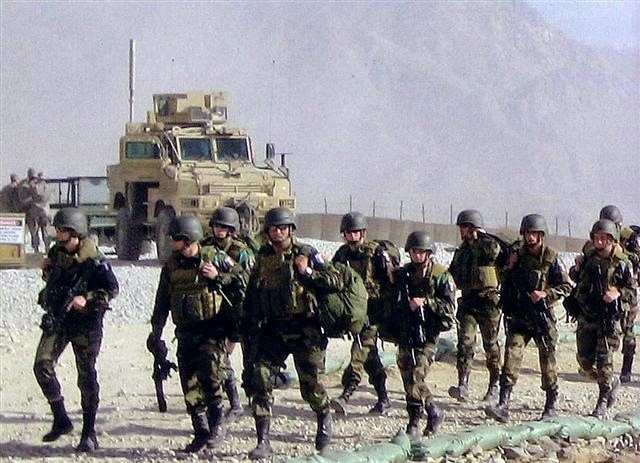 In March, French troops from GTIA Kapisa and a battalion of the ANA were involved in the Battle of Alasay, a successful attempt to drive the Taliban out of the Alasay valley, which insurgents had controlled since 2006. The French troops belonged to the Chasseurs Alpins 27e Battalion, an elite mountain warfare unit. With the aid of U.S. air support in the form of F15-E fighters, A-10 Thunderbolts, AH-64 Apache helicopters and Predator drones, the operation was able to establish two new ANA bases in the valley despite the refusal of Afghan troops to advance at one point in the battle (Le Point, March 24).

Italy’s Role in Sarubi in Question

While a French intelligence report was highly critical of the August 2008 Sarubi operation that led to 10 French deaths, media investigations have indicated that an Italian policy of paying off Taliban fighters while Italian troops operated in Surubi prior to the arrival of the French may have played a major role in the disaster (RFI, September 5, 2008). An October 15 report by the Times revealed Italy’s secret service had been paying Taliban commanders and local warlords to keep the region quiet and avoid Italian casualties. The U.S. ambassador in Rome was reported to have made an unpublicized démarche (diplomatic protest) over the Italian policy after American communications intercepts of conversations between Italian intelligence agents and Taliban commanders disclosed the existence of the payoffs. The payments were not revealed to French forces when they took over from the Italians in Sarubi in July 2008. The result was an entirely inaccurate French threat assessment based on the Italian experience in the area. When hundreds of insurgents attacked the French column in Sarubi, it came as a complete surprise to the lightly armed force. [2]

Italian officials have denied the reports, saying the alleged démarche was merely a “request for information.” U.S. embassy officials would neither confirm nor deny the report. Italian Defense Minister Ignazio La Russa described the allegations as “complete rubbish,” suggesting the insurgents had failed to mount attacks because of “the behavior of our military, which is very different compared to that of other contingents” (Times, October 16).

The Times has stood by its report, citing the American intercepts. It also received confirmation of the payments from Afghan government officials, senior ANA officers and a Sarubi Taliban commander, Mohammad Ishmayel (Times, October 16). Families of French soldiers killed in the Sarubi operation are asking if the Italian payments were used to buy the arms used by insurgents in the ambush (France 24, October 16).

With pressure from the U.S. to increase its deployment on one hand—but polls suggesting a majority of French voters oppose French participation in the Afghanistan conflict on the other—President Nicolas Sarkozy declared in late October that French participation was “necessary,” but “France will not send a single soldier more” (Le Parisien, August 22; Le Figaro, October 14).  Sarkozy noted it was France’s goal to see Afghan troops step up to combat the Taliban. “They will be the most effective in winning this war because it is their country. But we need to pay them more to avoid desertions that benefit the Taliban.”

Nevertheless, France has increased the number of vital combat troops engaged in Afghanistan without increasing total numbers by turning over guard duties in Kabul to a Georgian unit, allowing one company to join frontline operations. 150 sailors currently part of Operation Enduring Freedom will no longer be counted as part of the French deployment in Afghanistan, allowing an increase in the same number of combat troops. A detachment of 150 gendarmes trained and equipped as infantry will train Afghan police but will not be counted in the military deployment (Le Monde, November 18). [1] The operational reclassification of 150 sailors will allow the return of 150 members of France’s Special Forces, which have not deployed in Afghanistan since being withdrawn in 2007.

Besides public opposition, the French war in Afghanistan is also facing challenges from French courts. Under a 2005 law, French officers can now be tried in criminal proceedings before the Armed Forces Tribunal in Paris for “unintentional acts committed in the exercise of their duties” if it is established “that they failed to display normal diligence, on account of the power and resources available to them and the difficulties inherent to the missions entrusted to them by the law” (Le Monde, November 12). The latest case has been filed on behalf of two families of French soldiers killed in the Sarubi ambush of August 2008. Senior officers are naturally disturbed by the new role of civilian judges in reviewing military decisions.

French Foreign Minister Bernard Kouchner recently criticized the German contingent of NATO in Afghanistan, saying they “are not there to fight” (AFP, November 5). France, on the other hand, has indicated through its military reorganization in Afghanistan a commitment to a greater emphasis on combat operations. The professional soldiers of the French Marine and Foreign Legion units are no doubt determined to reverse the damage done at Sarubi and the Special Forces are eager to return to Afghanistan. Though Kouchner has acknowledged that Afghan president Hamid Karzai is “corrupt,” he has resisted setting a date for an eventual French withdrawal from Afghanistan, saying only that “Four to five years [from now] seems to me to be a reasonable prospect” (AFP, November 16).
Notes:

This article first appeared in the November 25, 2009 Issue of the Jamestown Foundation’s Terrorism Monitor.