Though no claim of responsibility has been made, it appears Taliban/al-Qaeda elements may be behind the assassination of a recently retired Pakistani Special Forces general and his driver in Islamabad (The News [Islamabad], November 20). The target of what appeared to be the work of professional killers was Major General (Ret.) Amir Faisal Alvi, former General Officer Commanding of the Special Services Group (SSG), Pakistan’s elite Special Forces unit. 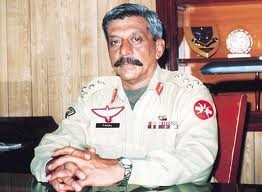 General Alvi led several SSG operations in the Wana district of South Waziristan, during which numerous Taliban members were killed or captured. Seemingly at the top of his career, General Alvi was suddenly dismissed by the Army on disciplinary grounds for “conduct unbecoming” in August, 2005. The details of the dismissal have never been made public, leaving outsiders to speculate whether the dismissal may be linked to his assassination.

After a forcible retirement from the Army, General Alvi took up an executive position with the Islamabad office of Malaysia’s Red Tone Communications, a telecommunications company. An associate of the general revealed afterwards that the general had been receiving phone-threats from the Taliban for three months and had a death threat painted on his house only days before the murder (The News, November 20). Despite the warnings, General Alvi appears to have taken few, if any security precautions, taking the same route to his office most days. The ambush was carefully planned, taking place at a speed-break where his vehicle would be forced to slow down.

According to witnesses, General Alvi’s vehicle was intercepted at the speed-break by two youths on a motorcycle and a Mitsubishi Pajero SUV. Acting in a deliberate fashion, the assailants, one youth from the motorcycle and two men from the SUV, opened fire from both sides of the general’s vehicle, making sure that Alvi was dead before leaving. The whole operation took roughly 30 seconds. According to police, 9-mm pistols were used in the attack, with the general struck by bullets eight times, his driver six times (The News, November 20).

A former instructor of the General at the military academy, Brigadier Shaukat Qadir speculated on the reason Alvi may have been targeted: “he was the kind of fellow who probably made some boasts about what he has done in his life in the SSG and elsewhere in the operations in Wana so perhaps that would be one reason I could think of” (Dawn [Karachi], November 19). Though the SSG played a major role in the Lal Masjid assault of 2007, General Alvi was no longer with the force by that time. 20 SSG members were killed in a retaliatory suicide bombing on the SSG officers’ mess in September 2007.

Besides al-Qaeda and the Taliban, the Sunni extremist Lashkar-i-Jhangvi is also considered a suspect in the killings. Interior Affairs Advisor Rehman Malik announced recently that Lashkar-i-Jhangvi was one of three groups being used to carry out al-Qaeda operations in Pakistan (The News, November 23; Dawn, November 21). Considering the sensitive nature of General Alvi’s work with the SSG and the mystery surrounding his dismissal from the army, it is also possible that the reason for his death may be known only to those deep inside Pakistan’s intelligence community.

The SSG consists of at least three battalions of highly trained commandos. Since its formation in 1956, SSG personnel have received advanced training from the Special Forces of Britain, the United States and China. The SSG in turn offers Special Forces training to a number of Middle East nations. The unit saw extensive service during the 1965 and 1971 wars with India and the 1978-1979 Soviet-Afghan war. Unconventional warfare, reconnaissance, counter-terrorism and intelligence-gathering are a few of its many responsibilities. In recent years the SSG has been used in covert operations targeting al-Qaeda and Taliban members in Pakistan’s northwest frontier region. SSG personnel often work closely with Pakistan’s Inter-Services Intelligence.

This article first appeared in the November 26, 2008 issue of the Jamestown Foundation’s Terrorism Focus