In the holds of the Ukrainian cargo-ship MV (Motor Vessel) Faina, seized by Somali pirates in September, are 33 Russian-designed T-72 battle tanks and a substantial cargo of grenade launchers, anti-aircraft guns, small arms and ammunition. Kenya and Ukraine both insist the arms and armor are destined for the Kenyan Department of Defense to replace Kenya’s 1970s vintage Vickers MK 3 tanks (Daily Nation, September 29; AFP, September 28). At the moment, Kenya’s armed forces do not use any Russian-designed equipment and Kenyan military sources have been reported as saying no training on the Ukrainian/Russian-built equipment has taken place, normal purchasing procedures were not followed and the Department of Defense was only informed of the shipment after it had been seized by the Somali pirates (Daily Nation, September 29).

A shipping document found on the vessel by Somali pirates indicates the arms are headed for “GOSS,” the usual acronym for the Government of South Sudan. Ukrainian and Kenyan officials insist the acronym stands for “General Ordinance Supplies and Security,” an apparently meaningless phrase that some Kenyan military officials say they have never seen before (Sudan Tribune, October 8). Kenyan government spokesman Dr. Alfred Mutua says Nairobi is still hopeful the MV Faina will be released “and we will get our cargo” (Daily Nation, October 23).

There are claims from maritime shipping observers that the MV Faina is actually the fifth ship in the last year involved in shipping arms and tanks through the Kenyan port of Mombasa to South Sudan (The National [UAE], September 29, BBC, October 7). 50 tanks destined for the SPLA were seized in Mombasa in February, though the fate of this shipment is uncertain (Sudan Tribune, February 15; Al-Ray al-Aam [Khartoum], February 15, Juba Post, February 22). With the status of Sudan’s oil fields still in dispute, South Sudan appears to be arming in preparation for a resumption of Sudan’s Civil War following the 2011 South Sudan independence referendum. The T-72’s would be more than a match for Khartoum’s Chinese-designed Type 59 (al-Zubayr) tanks, a copy of the Russian-designed T-54, though more modern Type 96 (al-Bashir) tanks were unveiled in a military parade last December. Nevertheless, an SPLA spokesman denied the weapons were destined for South Sudan, saying the SPLA was not yet “advanced enough” to receive shipments of modern weapons (Reuters, September 29). There are no indications that SPLA personnel are receiving the extensive training needed before they could make use of the MV Faina’s cargo.

Both moves are seen as expressions of Khartoum’s displeasure with the use of Mombasa as a port for unauthorized arms shipments to land-locked South Sudan. Under the terms of the Comprehensive Peace Agreement between north and south Sudan, all arms purchases by the southern Sudanese People’s Liberation Army/Movement (SPLA/M) must be approved by the central government. Khartoum has also accused Ethiopia of supplying arms to the SPLA (Reuters, October 13). Shipments of arms to South Sudan do not violate the current UN arms embargo, as has been reported elsewhere.

On October 27, Russia announced that it had been given permission by Somalia’s Transitional Federal Government (TFG) to take military action against Somali pirates (ITAR-TASS, October 27). The Russian Baltic fleet guided-missile frigate Neustrashimy is now in Somali waters and is prepared to “take part in joint operations against pirates together with the vessels of foreign naval forces” (Kommersant, October 28). The MV Faina is currently surrounded by ships of the U.S. Navy’s Fifth Fleet determined to ensure the arms are not offloaded. Somalia’s Islamic Courts Union (ICU) resistance movement has denied any involvement in the hijacking, noting that the ICU had eliminated piracy in 2006 (Reuters, September 29).

Confusing the issue is a recent statement by anonymous Yemeni government sources that the tanks and other arms on the MV Faina were destined for Yemen, not South Sudan (Yemen Post, October 20).Yemen is currently the world’s fourth largest importer of Russian arms, many of which are resold to third parties, and has just concluded a deal with Moscow to allow Russian naval ships to “use its ports for reaching strategic objectives” (Yemen Times, October 18). The Neustrashimy docked in Aden before heading for Somali waters. Amidst the rising tensions, Yemen has announced the postponement of this week’s regional summit on piracy, scheduled to be held in the Yemeni capital of Sana’a (Yemen Post, October 20). 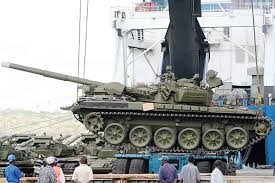 T-72 Tanks being Offloaded from the MV Faina (Gideon Maunu)

(AIS Update: The MV Faina was released by its captors on February 5, 2009 after the payment of a $3.2 million ransom by the ship’s Ukrainian owners. The T-72 tanks were offloaded in Kenya, allegedly destined for a Kenyan military base according to the Nairobi government. U.S. satellite photos later revealed the armor was sent on to South Sudan in violation of the 2003 Comprehensive Peace Agreement (CPA), for which Kenya was a guarantor. See https://www.facebook.com/notes/172412982790641/ and https://wikileaks.org/plusd/cables/09KHARTOUM881_a.html  for relevant U.S. diplomatic cables released by Wikileaks.)