With roughly 20% of its combat capability currently deployed, combating insurgency in the northwest frontier region, Pakistan’s military is eager to consolidate its hold on the tribal areas and return its regular forces to the eastern frontier with India. To accomplish this, the government has turned to one of its weakest and most unreliable security forces: the paramilitary Levies. 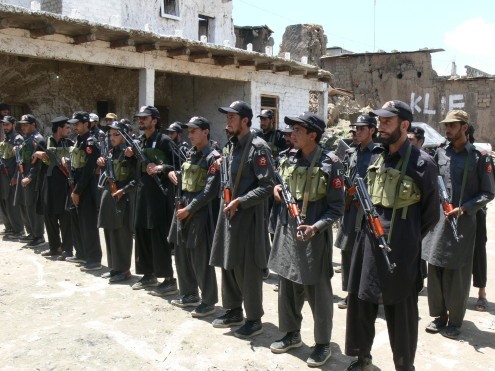 Levies of the Bajaur Agency (FATA)

On February 17, President Asif Ali Zardari announced a new plan to upgrade the Levies to enable them to take on the task of providing police services and general security after the withdrawal of the army (Associated Press of Pakistan, February 17). According to the President, “The anti-militancy war is a huge national effort and calls for strengthening and upgrading all its components” (The News [Islamabad], February 19).

The Levies (originally the “Swat Levies”) were created by the British in 1895 as a paramilitary police force. The Levies now come under the administrative control of the Ministry of States and Frontier Regions (SAFRON). The restructuring of the Levies will include an expansion in numbers, better training and the provision of modern weapons and equipment (Daily Times [Lahore], February 15). A special directorate general will be created to oversee the upgrade and operations of the Levies.

To accomplish this, the Levies have been allocated a supplementary grant equivalent to 300% of its current budget. This will be followed by $17.6 million in spending to improve the levies over the next two years. Some of this money will be spent on the construction of new posts in the Federally Administered Tribal Areas (FATA), the North-West Frontier Province (NWFP) and Baluchistan (Associated Press of Pakistan, February 17). New equipment is vitally needed; until now the Levies have been issued little more than an outdated rifle and a handful of rounds.

The unreliable Levies will have an uphill struggle to maintain control in the frontier region. On February 14, the Political Agent for Orakzai Agency ordered the pay of local Levies suspended over their failure to perform their duties, citing fear of Taliban militants. The Levies were warned that they would be dismissed if they did not resume their activities (The News, February 14). Six officers from the Malakand Levies were among 155 NWFP officials against whom the government recently initiated action due to their ties to Islamist militants (The News, January 14). Last August, 66 Levies personnel, including a subadar major, were suspended after they were charged with laying down their arms before the Taliban in Malakand Division in the lead-up to Operation Rah-e Rast (Nawa-e Waqt, August 27, 2009). Nevertheless, over 100 Levies have been killed and another 40 injured in clashes with militants in the last four years (The News, February 19). A suicide attack in Jamrud (Khyber Agency) on February 10 killed 15 Levies and Khassadars (Tribal Police) (The News, February 12).

Poor pay and lack of compensation to heirs if killed in action are issues that pose a major problem to recruiting capable personnel to the Levies. Taliban salaries are far higher and compensation of Rs 5 million ($58,871) is paid to the families of dead Taliban fighters (Khabrain [Islamabad], August 19, 2009). On February 9, the Peshawar High Court responded to a number of lawsuits filed by heirs of deceased Levies and ordered SAFRON to pay Rs 1 million ($11,774) as compensation to the heirs of Levies and other security personnel killed in military operations in the tribal region (The News, February 10). The upgrade program is expected to bring the wages of the Levies and Khassadars in line with NWFP police personnel in urban areas. Levies are currently paid Rs 3,500 ($41) per month, less than the official minimum wage.

Habibullah Khan, a senior member of the FATA secretariat, has suggested that the Levies establish their own investigative and intelligence services (The News, July 31, 2009). The FATA secretariat has also urged the recruitment of another 5,000 Levies to bolster the current 6,779 Levies in their new mission of securing the gains of the Pakistani military.

This article first appeared in the February 25, 2010 issue of the Jamestown Foundation’s Terrorism Monitor