Israel’s assault on Gaza has brought widespread condemnation from the Muslim world, though no Muslim nation has dared intervene so far. In many cases this official position is at variance with popular sentiments, as in distant Indonesia, the world’s largest Muslim nation. 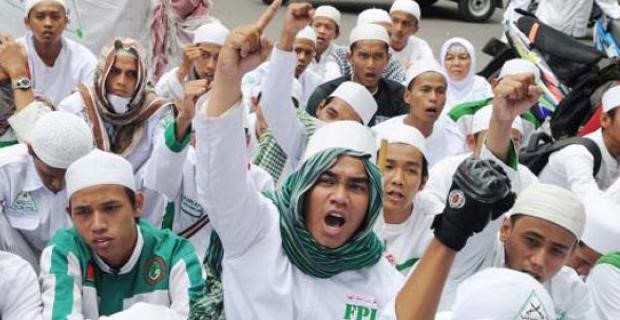 With no Israeli embassy in Jakarta (the two nations have no diplomatic relations) and no Jewish population to speak off, Indonesian anger at the Gaza incursion has at times been hard-pressed to find an avenue for expression. The country’s lone synagogue, a barely used and rabbi-less building in Surabaya, has been the target of angry mobs shouting “Go to hell, Israel” while burning Israeli flags (Antara News Agency [Jakarta], January 8). An unlucky KFC outlet in Central Sulawesi province was overrun by 300 protesters enraged over US support for Israel, who fortunately restricted their violence to the furniture (Xinhua, January 8). Demonstrations have also occurred at Jakarta’s Egyptian and U.S. embassies.

President Susilo Bambang Yudhoyono’s government will be seeking re-election in April, so it is being forced to address public anger at Israel while preventing non-government players from taking actions that might be outside the national interest. According to President Yudhoyono, “I’ve talked to Middle East leaders, to the Palestinian ambassador to Indonesia, to the UN Resident Coordinator in Indonesia…and [the conclusion is] additional weaponry, bombs, rockets, tanks, or air power are not what the Gazans need” (Jakarta Post, January 17). The government views financial and humanitarian aid as the best way to help the Palestinians of Gaza, though there are many in Indonesia who would prefer to see more material military assistance sent from Indonesia to pursue “jihad” against Israel for its actions in Gaza.

Indonesia’s Armed Forces (Tentara Nasional Indonesia –TNI) already have a peacekeeping unit of 210 soldiers deployed in Lebanon as part of the UN Interim Force in Lebanon (UNIFIL). TNI chief General Djoko Santoso has indicated Indonesia is ready to contribute to another peacekeeping force in Gaza if required (Antara, January 12).

There are a number of Indonesian Islamist groups seeking government support to send fighters to Gaza, including the Islam Defenders Front (Front Pembela Islam – FPI) and Hizb ut-Tahir Indonesia (HTI). In Bandung, West Java, the FPI is providing physical, military, and mental training to 40 recruits in a factory (Jakarta Post, January 16). In the Jember region of East Java, the organization says it has recruited 60 Muslim youth for front-line service against Israel (Jakarta Post, January 7). The recruits are receiving a brief period of training in the methods of Pencak Silat, a traditional Indonesian martial arts movement strongly associated with anti-colonialism. The FPI claims to have 4,000 volunteers for service in Gaza, but can only afford to send three to five fighters, who will receive a perfunctory ten days of instruction, though weapons training is not part of the curriculum: “We won’t be teaching them how to use weapons. They will have to learn in the field when we dispatch them to Gaza” (AFP, January 8). The Mosque Youth Coordination Body claims to have recruited 3,500 volunteers to either fight or provide humanitarian assistance, though it estimates only half of these will actually go to Gaza (AFP, January 8).

The Ansor Brigades paramilitary, belonging to Indonesia’s largest Islamic organization, the Nahdlatul Ulama, is also training 78 volunteers for Gaza. Candidates need bring only a letter from their family and a health certificate. All expenses must be handled by the volunteer. Recruits are encouraged to develop spiritual powers that will allow them to fend off Israeli bullets and other weapons. The rival FPI eschews such traditional methods in their own training: “There is no immunity in the FPI. If we learn about such practices, how can we die a martyr?” Military strategy is taught to the Ansor recruits, but no weapons training is offered. The program has not been approved by Nahdlatul Ulama headquarters (Tempo [Jakarta], January 15).