The announcement yesterday by General David Petraeus that the United States had reached agreements with Russia and several Central Asian nations for a new (and costly) U.S.-NATO supply route into Afghanistan came as the struggle for control of the supply routes through Pakistan continues. While Pakistan’s military battles the Taliban to secure the Khyber Pass, a vital route for carrying U.S. and NATO supplies into Afghanistan, there are signs that the Taliban is not only continuing attacks on supply terminals in the North-West Frontier Province city of Peshawar, but now intends to choke off Coalition supplies at their offloading point in the harbor of Karachi. Roughly 75% of Coalition supplies run through Karachi to the Khyber Pass and on into Afghanistan, usually carried by private Pakistani transport contractors. 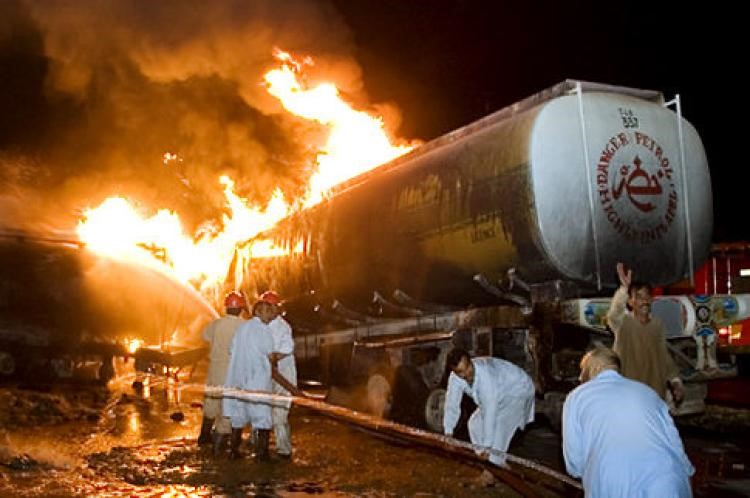 Following months of reports concerning the infiltration of Taliban militants in the port city of Karachi, Pakistani security forces encountered stiff resistance during a series of raids on Taliban safe-houses in the Sohrab Goth neighborhood of Karachi on January 15 (Dawn [Karachi], January 15). Two security men were killed and seven wounded as 79 suspects and a large number of modern weapons were seized. The militants were alleged to have been warning transportation firms not to take on loads destined for Coalition forces in Afghanistan. The suspects allegedly included members of the Tehrik-e-Taliban Pakistan (TTP) and the banned Lashkar-e-Jhagvi. An Inter-Services Intelligence (ISI) team and a detachment of the Anti-Violent Crime Unit (ACVU) participated in the raids as part of their search for a kidnapped Iranian commercial attaché. Over 100 mobile units of the police and the Sindh Rangers, a Karachi-based Interior Ministry paramilitary, also participated in the raids (Daily Times [Lahore], January 16). According to Karachi police chief Wasim Ahmed, the suspects were “planning massive terrorist activities in the city” (Press Trust of India, January 16). Residents of the neighborhood described the suspects as innocent men who worked as mechanics and laborers (Daily Times, January 16).

We are very strong in Karachi; our network could come in action once the central Amir of Tehrik-e-Taliban Pakistan [Baitullah Mahsud] ordered the Taliban for action. We want to help improve law and order and maintain peace in Karachi. The Taliban could surface in Karachi if foreign hands do not stop interfering in the city… We are capable of capturing any city of the country at any given time (Pakistan Press International, August 6, 2008; Daily Times, August 10, 2008).

At the other end of the supply route in the north-west frontier region, NATO supply terminals were left largely unguarded earlier this month when Frontier Corps paramilitary troops were withdrawn from the ring road where the terminals are located for duty in Peshawar. Taliban militants took advantage of the lack of security to fire six rockets into the Faisal and Khyber Ittifaq terminals in Peshawar, destroying a total of six containers. The attackers fled without known casualties after a short fire-fight with the remaining security personnel (Daily Times, January 13). The attacks were the first in Peshawar since a series of strikes in December killed three people and destroyed massive quantities of military equipment awaiting shipment through the Khyber Pass. The supply terminals consist largely of open fields and have no special defenses. 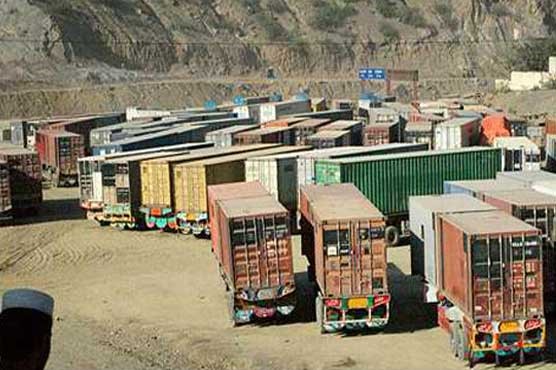 After the attack, Peshawar police began joint patrols with troopers from the Frontier Corps paramilitary, including checks on pedestrians and passing vehicles (Geo TV, January 14). A new security plan has been devised for protecting the 14 terminals on the Peshawar ring road. Over the next few weeks the United States is scheduled to supply Pakistan’s Frontier Police with large quantities of non-lethal security and transportation equipment (The News [Islamabad], January 15). There are continuing reports that locally contracted owners of oil tankers are heeding the warnings from the Taliban while meeting their own needs by setting fire to their trucks to collect insurance provided by foreign companies (Daily Afghanistan, December 14, 2008). Other companies hauling supplies along the 30-mile highway between Peshawar and Torkham are beginning to decline loads, citing the risk to their drivers (AFP, December 31, 2008).

The supply route through the Khyber Pass was shut down on January 13 as Pakistani military forces expanded a two-week-old offensive against Taliban militants in the Landi Kotal and Jamrud subdivisions of the Khyber Tribal Agency. With the border post at Torkham closed, as well as the entire highway between Torkham and Peshawar, Pakistani troops searched for Taliban hideouts and demolished homes believed to shelter Taliban fighters (AFP, January 13). It was the second time this month the Peshawar-Torkham highway has been closed for security purposes.

A secondary supply route through southwest Pakistan 375 miles south of the Khyber Pass has only just been reopened after tribesmen built road-blocks to protest the killing of a local man in a drug raid. The route runs from Quetta (believed to be the home of the Afghan Taliban’s top leadership) to the border point at Spin Boldak. The blockade in the town of Qila Abdullah left hundreds of trucks stranded along the road for five days until government officials negotiated a removal of the blockade. The road was immediately closed again due to snow (AFP, January 14).