Algeria has modified its stance on the conflict in northern Mali by dropping its insistence on a mediated settlement based on dialogue in favor of a growing willingness to consider the military option to bring an end to Islamist rule in the region. Part of this shift may be attributed to Algeria’s desire to keep French military forces far from Algeria’s 870-mile border with Mali by providing military and logistical assistance to an African intervention force that would otherwise be provided by France. Algeria’s approach now appears to be based on efforts to separate the largely Tuareg Islamist Ansar al-Din movement from the Al-Qaeda in the Islamic Maghreb (AQIM) and Movement for Unity and Jihad in West Africa (MUJWA) Islamists who have occupied northern Mali. 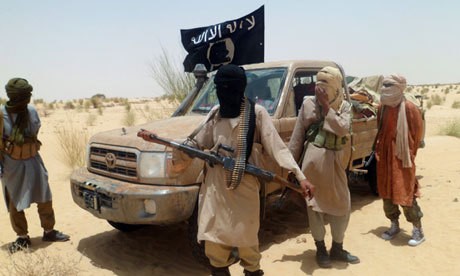 Referring to the possibility of an African Union/ECOWAS military intervention in Mali, a recent statement issued by Ansar al-Din warns of the efforts of the “temporary authorities in Mali” to “ignite a ferocious war in the region, and its involving of other parties in it, which doesn’t serve the interest of Mali itself or the neighboring countries and threatens regional stability…” The statement further discounted possible French involvement as being motivated by “greed in exploiting the underground resources and riches of the region.” The movement is, however, prepared to negotiate “through the mediation of Algeria and Burkina Faso” (Agence Nouakchott d’Information, October 19).

Contacts with the Algerian authorities have not been interrupted, not even for 24      hours. Our delegations are often sent to Algiers. Algeria has repeatedly stated that a political solution exists. She has overcome difficulties and solved problems more difficult and complicated than ours. She has always found a solution. Some would not let [Algeria] play its role in the region (Tout sur l’Algérie, October 30).

When asked if Ansar al-Din would join an anti-terrorist coalition to expel AQIM from northern Mali, the spokesman initially expressed disinterest but was ultimately non-committal, an attitude which in itself suggests the movement is at least considering its options:

We are going to fight al-Qaeda in whose interest? For the interests of Obama? The problem of the Muslim world cannot be solved through war but rather with a realistic vision of the situation and with a return to religion. Those who would fight al-Qaeda must turn to religion and then ask themselves if they must fight al-Qaeda… I told you that we are an Islamist movement. We will fight those who our religion orders us to fight and we stop fighting when our religion requires us to do so (Tout sur l’Algérie, October 30).

Referring to Algeria’s colonial past, Bouamama appeared to regard Algeria as a potential guardian against foreign military intervention rather than a participant: “We will resist and defend ourselves; that is our right. I think that Algerians are best placed to know. Algeria has paid [in the fight against colonialism] with the blood of a million and a half martyrs. We will not be the first to suffer a military intervention” (Tout sur l’Algérie, October 30). The Ansar al-Din spokesman’s remarks were made the same day the Algerian minister of veterans’ affairs demanded a “frank acknowledgement” of French war crimes committed during the colonization of Algeria (Algérie Presse Service, October 30).

An Algerian daily said that official sources from Ansar al-Din had held a secret meeting with Algerian military commanders in Kidal in the fourth week of October to discuss the issue of foreign military intervention in northern Mali. According to the sources, the leader of the Algerian military delegation warned that Algeria was under pressure to take part in the intervention and had concluded such action was inevitable if terrorism was to be defeated in the region (El-Fadjr [Algiers], October 24).

Burkina Faso president Blaise Compaoré has been acting as a mediator for the crisis in northern Mali for several months and has met with both the largely sidelined Tuareg separatists of the Mouvement national pour la libération de l’Azawad (MNLA) and the Tuareg Islamists of Ansar al-Din. While it has been suggested that Compaoré is working to split Ansar al-Din from their AQIM and MUJWA allies, the Burkinabé president is adamant that he is “not seeking to divide anybody.” He does, however, follow the emerging line that the military option would target “only terrorists and traffickers,” i.e. the militants of al-Qaeda and MUJWA (Jeune Afrique, October 13).

ECOWAS spokesman Abdou Cheick Touré appeared to echo this approach when he noted a negotiated approach had not been abandoned and that it was “normal” to talk to the Tuareg of the MNLA and Ansar al-Din while emphasizing that the latter must drop their alliance with AQIM and MUJWA: “[The Tuareg] are Malians. We must see if they agree to come back into the republic, to abandon their secessionist ideas, to make peace and abandon other criminal groups” (AFP, October 30).

Algerian Foreign Ministry spokesman Amar Belani has claimed there is a trend in the press to characterize Algeria’s position on the military intervention as being at odds with its neighbors. Noting that the use of force was “legitimate” to eliminate terrorism and organized crime in the Sahel, Belani also drew a distinction between the Tuareg insurgents and the outside Islamist groups who were now based in northern Mali: “The use of force must be carefully done to avoid any ambiguity or confusion between northern Mali’s populations who have legitimate demands and the terrorist groups and drug dealers who must be the primary target…” (Algérie Presse Service, October 11).

There are reports that the MNLA has made important changes in its military leadership in anticipation of an offensive against AQIM. For the moment, they are still waiting to hear whether Ansar al-Din leader Iyad ag Ghali will be friend or foe in the looming struggle. Ag Ghali is said to be under strong pressure from his Ifoghas tribe to abandon his AQIM allies, with traditional Ifoghas chief Intalla ag Attaher telling ag Ghali: “It is now that you have to decide or in the future we will consider you as an enemy” (Jeune Afrique, October 29).

In a recent interview, Abdelkader Messahel, Algeria’s minister for Maghrebi and African Affairs, appeared to offer the Tuareg rebels a review of their grievances if they dissociated themselves with terrorism or separatism. According to Messahel, AQIM and MUJWA are “terrorists and drug traffickers” with whom there can be no negotiation: “I think that the time has come for these [Tuareg] groups in northern Mali to distance themselves from terrorism and organized crime. And at the same time for them to engage in a national process that will preserve Mali’s national unity and dissociate these groups from any quest for independence or any kind of collusion with these terrorist groups.” On Ansar al-Din’s alliance with AQIM and MUJWA, Messahel said: “We want this group to dissociate itself once and for all from any ties or collusion with all forms of terrorism. This is what we think, and this is what we want.” At the same time, Messahel emphasized the importance of strengthening the Malian army, “which must also be at the center of the Malian State’s redeployment throughout its territory” (RFI, October 16).

An AU delegation will meet with the defense ministers of Algeria, Mauritania and the ECOWAS nations and their military chiefs-of-staff on November 5 to discuss planning for a military intervention in Mali (Jeune Afrique, October 27).