In the midst of a major drive to increase security in Africa’s Saharan and Sahel nations, American, African and European military forces have just concluded the latest version of Operation Flintlock (May 2-23), one in a series of multinational military exercises designed to foster and development international security cooperation in North and West Africa. The latest exercises came at a time of growing concerns over large-scale drug trafficking in the region and kidnappings carried out by elements of al-Qaeda in the Islamic Maghreb (AQIM). The maneuvers are conducted as part of the Trans-Sahara Counter Terrorism Partnership (TSCTP). 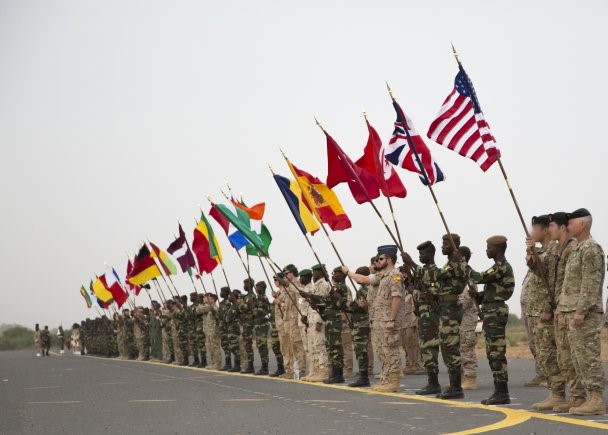 1200 soldiers participated in the latest maneuvers, including 600 U.S. Marines and Special Forces, units from France and Britain and smaller European contingents from Germany, Spain and the Netherlands (L’Essor [Bamako], May 5). African countries with military representation included Mali, Algeria, Burkina Faso, Niger, Mauritania, Nigeria, Chad, Senegal, Tunisia and Morocco. The exercises were headquartered out of a Multinational Coordination Center set up at Camp Baangre in the Burkina Faso capital of Ouagadougou. Malian Special Forces received training in responding to hostage-taking operations (as carried out by AQIM). Many of the Malian participants were veterans of fighting Tuareg rebels in northern Mali.

The new participant in these exercises was Spain, once a formidable colonial power in Africa. Though the Flintlock command center in 2008 was at the Spanish-American joint use naval base at Rota, this was the first time Spanish troops joined the exercises. There were suggestions in 2008 from AFRICOM leader General William Ward that Rota might make a suitable permanent headquarters for AFRICOM—whose HQ is currently based in Stuttgart, Germany—as no African nation appears prepared to host it on the continent (El Pais, April 16). Other than the Spanish garrisons in the tiny coastal colonies of Ceuta and Melilla, it has been 16 years since the Spanish ended their military presence in Africa by withdrawing an air detachment in Equatorial Guinea (El Pais, May 24). The Spanish Defense Ministry withheld details on its participation for fear the mission might be mistaken for a rescue team going after two Spanish citizens currently being held hostage by AQIM (El Pais, May 24).

Senegal was another new participant, sending 38 Special Forces soldiers.  Their commander, Major Cheikhna Dieng, said their presence was part of Sengal’s preparations for al-Qaeda infiltration efforts (Agence de presse Sénéglaise, May 11). Senegal is over 90% Muslim. Despite the stated objective, there were apparently some concerns that the Senegalese Special Forces trained in Operation Flintlock might be deployed against separatists in southern Senegal’s Casamance region, where elements of the Mouvement des forces démocratiques de Casamance (MFDC) have been engaged in a low-level conflict with the government since the 1980s (Agence de presse Sénéglaise, May 11).

Despite having the largest and most effective military in the Sahara region, Algeria has always been a small player in the exercises. Despite its efforts to draw Algeria into coordinated counterterrorism efforts, Washington’s reluctance to provide Algeria advanced military equipment due to Israeli objections has caused dissatisfaction in Algiers, which is now looking to its old Cold War supplier, Russia, for sophisticated military supplies it cannot obtain from the United States (El Khabar [Algiers], May 24; Khaleej Times [Dubai], May 4).

The exercises began a week after Algeria, Mali, Mauritania, Chad and Burkina Faso, and Niger established a “Joint Operational Military Committee” at Tamanrasset on April 20, tasked with improving regional security and military cooperation. Libya initially signaled it would join, but later withdrew.

This article first appeared in the June 4, 2010 issue of the Jamestown Foundation’s Terrorism Monitor