Various reports are claiming that the guerrillas of Uganda’s Lord’s Resistance Army (LRA) have moved in bulk into South Darfur, where they will allegedly seek supplies and arms from the Sudanese government. The movement into Darfur was reported to have been compelled by helicopter attacks on the LRA by Ugandan Special Forces units operating out of Yambio, Sudan as part of a tripartite (DRC, Uganda, South Sudan) military offensive against the brutal fighters led by the notorious Joseph Kony. 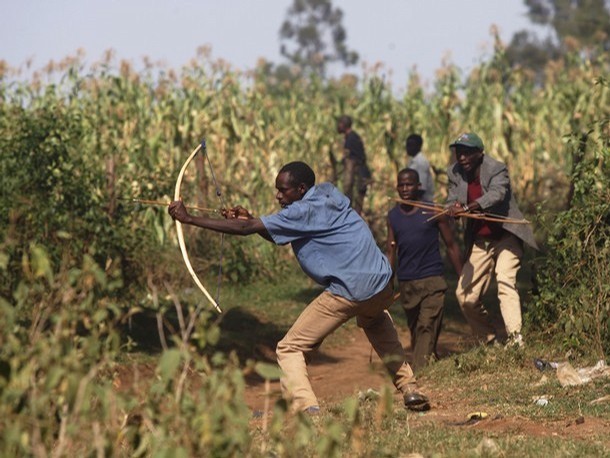 Most prominent of these was a front page cover story in Britain’s Independent daily asserting Kony and a significant part of his forces had crossed into southern Darfur (Independent, October 17). The main source in the story was a statement by Major-General Kuol Deim Kuol of the Sudan People’s Liberation Army (SPLA) of South Sudan that was carried in the Sudanese press two weeks earlier (Sudan Tribune, September 28). General Kuol claimed the bulk of the LRA forces had crossed from the Democratic Republic of the Congo (DRC) and the Central African Republic (CAR) into southern Darfur, where they had clashed with the local population. The General maintained SPLA reconnaissance groups had tracked the LRA across the border, where he suggested they would seek a safe base for their wives and families while seeking arms and ammunition from the Sudanese Armed Forces (SAF).

However, the Independent reported Kuol saying hunters had encountered LRA fighters near the town of Tumbara. There is no such place in southern Darfur, though there is a Tambura in the southern part of Western Equatoria (South Sudan), close to the LRA’s operations in the CAR, but far from the border with southern Darfur. The Independent added that the LRA had moved into the “Raga district in southern Darfur.” Raga is in Western Bahr al-Ghazal, also part of South Sudan rather than Darfur. The director of communications from the United Nations/African Union Mission in Darfur (UNAMID) declared the mission had spent days going over reports of an LRA presence, but had failed to find any “hard evidence” to confirm them (Independent, October 17).

The original Sudan Tribune story said that “Kuol suggested that Kony is seeking protection from the Sudanese army and may be used to fight the Darfur rebels” (September 28). Basing its report on the Sudan Tribune story, the Kampala Observer claimed several days later that Kuol had stated that the LRA were fighting as mercenaries alongside the Janjaweed militia in Darfur (October 4).

Elsewhere, there were reports of LRA fighters killing two women in raids near Yambio in Western Equatoria at the same time the main group was reported to be crossing into Darfur (Sudan Tribune, October 16; New Vision [Kampala], October 16). The fighters were driven off by members of the lightly armed Arrow Boys, a local self-defense group that combats LRA incursions with weapons such as spears and bows and arrows. Yambio is roughly 650 kilometers from the border with South Darfur as the crow flies – much farther in rough and road-less bush country. If these reports are correct, they would suggest either the main body of the LRA has abandoned elements of its forces in the move north, or is still operating in the area where the DRC, CAR and Sudan borders intersect. Other LRA units were simultaneously reported to be carrying out new attacks in the northern DRC (BBC, October 14).

The presence in Darfur of the LRA, which is generally believed to have once been armed and funded by Khartoum in retaliation for Kampala’s support of the SPLA, would be a major embarrassment to President Omar al-Bashir, who is currently facing Darfur-related war crimes charges from the International Criminal Court (ICC). Salah Gosh, a senior presidential advisor who has been tied to war crimes in Darfur in his former capacity as director of Sudan’s National Security and Intelligence Services, accused the SPLA of issuing “fabrications,” adding, “The SPLA knows very well where Kony is” (Sudan Tribune, September 28).

The reports of an LRA entry into Darfur came as Ugandan President Yoweri Museveni invited Sudanese president Omar al-Bashir to an AU summit on refugees held this week in Kampala (New Vision, October 14). Despite Uganda being a signatory to the ICC statute—and thus obligated to enforce the ICC warrant for al-Bashir’s arrest—Museveni said such an act would not be “according to the culture of the Great Lakes region in Africa… We do not believe in surprise attacks.” An ICC representative insisted Uganda had a responsibility to carry out the arrest (Daily Monitor, October 16). The issue was resolved when Sudan decided to send two junior ministers to the summit instead (New Vision, October 19). Sudan has also expressed its willingness to share its expertise in the oil sector with Uganda as the latter begins development of a one-billion barrel oil reserve discovered on the Albertine rift in Uganda (Dow Jones Newswire, October 1; Sudan Tribune, October 2).

This article first appeared in the October 23, 2009 issue of the Jamestown Foundation’s Terrorism Monitor