In remarks very similar to recent statements from Egyptian al-Qaeda leader Ayman al-Zawahiri, a popular Doha-based Egyptian Islamic scholar and spiritual leader of the Muslim Brotherhood has accused Iran of being behind a new wave of Shi’a “imperialism” that threatens the existence of Sunni Islam in Egypt and other Muslim countries. 82-year-old Shaykh Yusuf al-Qaradawi is a media-savvy religious scholar based in Qatar. Al-Qaradwi is the president of The International Union for Muslim Scholars (IUMS) and the head of the European Council for Fatwa and Research (ECFR). He hosts a religious program entitled “Shari’a and Life” on Qatar-based al-Jazeera TV. 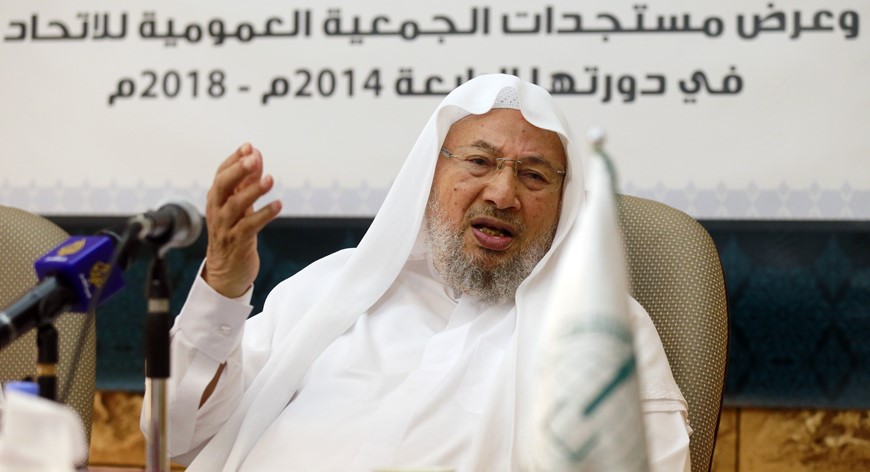 In a September 9 interview, al-Qaradawi attacked what he perceived as an Iranian-backed attempt to displace Sunni Islam with Shi’ism: “I don’t accept that any Arab or foreign country should attack Iran, but I don’t accept that Iran should attack any Arab country, especially seeing as some Iranians have imperial dreams, which is wrong and dangerous… What is happening is organized, an invasion… It is not a religious invasion but a political one. Iran is trying to impose itself on those around it and we refuse to follow a new form of neo-colonialism, be it Iranian or any other” (al-Masry al-Youm, September 9). Describing the Shia as “heretics” (mubtadioun), the shaykh alleged that well-funded missionary cadres are “invading Egypt,” as well as Sudan, Algeria, Morocco, Nigeria, Malaysia and Indonesia (Al-Ahram Weekly, September 25 – October 5). Iran responded by suggesting the cleric had come under “pressure from extremists” (Gulf Times [Doha], September 17). The remarks came at a time when tensions between Sunnis and Shias have grown due to the civil conflict in Iraq, Iran’s continuing nuclear program and the suggestion by some Western analysts that Iran is promoting the creation of a “Shiite Crescent” across the Arab Middle East.

The shaykh’s views on Shi’a “imperialism” have encountered widespread opposition in the Arab and Islamic world. A Kuwaiti commentator suggested al-Qaradawi was trying to mobilize the Sunnis in a war against the Shia and asked, “Would anything happen to Egypt if 100,000 Egyptians became Shi’is? And vice versa, would anything happen to Iran if the same number of Iranians became Sunni? Nothing would happen as long as brotherly relations prevail among different sects” (al-Watan [Kuwait], September 24). Shi’a Muslims form a majority in Iran, Iraq, Azerbaijan and Bahrain. They form sizable minorities in Saudi Arabi, Kuwait, the United Arab Emirates and Yemen.

Reaction was particularly negative in Lebanon, where al-Qaradawi claimed Hezbollah was trying to leverage popularity won in its 2006 victory over Israel to convert Sunnis to Shi’ism. Shaykh Fathi Yakan, head of the Islamic Action Front (Jabhat al-Amal al-Islami – an umbrella group of Lebanese Sunni Islamists allied with the Shiite Hezbollah), condemned the remarks of the “dear cleric”: “The most serious blow we received this week was a sectarian one dealt to us by a dear cleric, a blow which could have been deadly. We hoped that he would not have raised this issue. We hoped that the revered cleric would have referred in his talk to the increasing number of Jews coming to the Land of Al-Kinanah [Egypt]” (al-Manar TV, September 24). Though not referring to al-Qaradawi specifically, Shaykh Na’im Qasim, deputy secretary general of the Lebanese Hezbollah, saw an American hand behind efforts to create a sectarian divide in Islam: “This sedition has recently been bearing the U.S. signature because America wants to ignite the area under the slogan of the Sunni-Shi’i sedition with the aim of infiltrating it, especially since it found that the strength of the unity between Sunnis and Shi’is cannot be confronted” (al-Manar TV, September 24). Hezbollah chief Muhammad Hussein Fadlallah suggested the Egyptian shaykh should speak out against Christian missionary activity in the Islamic world instead of identifying Shiites as the problem. Fadlallah also accused al-Qaradawi of the committing the sin of fitna (creating discord between Muslims) in an interview with Kuwaiti newspaper Al-Rai Al-Amm (AP, September 24).

Leading members of the influential International Union of Muslim Scholars, headed by al-Qaradawi, have been highly critical of the shaykh’s allegations, describing them as divisive and embarrassing. With Shia members of the group threatening mass resignation, a meeting has been set for November to discuss the problem (Al-Ahram Weekly, September 25 – October 5).

Many of al-Qaradawi’s remarks were directed at Egypt, which has a negligible Shiite population, placed at less than one per cent: “When I left Egypt 47 years ago, it had not a single Shiite and now there are many… who took them to Shiism? Egypt is the cradle of Sunnism and the country of Al-Azhar.” Cairo’s al-Azhar University, the Islamic world’s leading school of Islamic studies, recognizes Shi’ism as a legitimate form of Islam and carries courses in Shiite studies. Al-Qaradawi has often found himself at odds with the institution and its leader, Muhammad Sayyid al-Tantawi. Ironically, al-Azhar mosque (which later grew into the university) was founded as a Shiite institution during the period of Shiite Fatimid rule in Egypt (969-1171 A.D.).

Al-Qaradawi’s remarks reinforce an apparent fear amongst Egypt’s leadership that they are subject to a Shiite infiltration designed to depose the regime. Islamic scholars have been asked to educate security forces in Shi’a ideology and strategy, while the Minister of Religious Endowments recently warned, “We won’t allow the existence of a Shiite tide in Egyptian mosques” (AFP, September 23). In a controversial interview in 2006, Egyptian president Hosni Mubarak attacked Shiites as disloyal; “Most of the Shi’a are loyal to Iran and not to the countries they are living in” (al-Arabiya TV, April 8, 2006).

A leading Egyptian jurist and Islamic scholar, Tariq al-Bishri, proclaimed “This fascism in the name of the Sunni majority against Shiites is the most dangerous thing for the Islamic nation because it pits Muslims against each other instead of against the invaders of their lands” (al-Dustur [Cairo], September 20). Prominent Saudi lawyer Amin Tahir Bediwi announced he will bring a lawsuit against al-Qaradawi in Qatar (The Peninsula [Qatar], September 29). A second lawsuit has been launched by Shi’a activists in Qatar, demanding al-Qaradawi be stripped of his Qatari citizenship and deported to Egypt (Al-Ahram Weekly, September 25 – October 5).

Al-Qaradawi has used his internet site this month to accuse Shiites of the forbidden practice of bid’a (innovation in religion): “They slap faces, strike chests until they bleed in commemoration of the death of Imam Al-Hussein (the Prophet Muhammad’s grandson)… They also do things when they visit the graves of the Prophet’s offspring like invoking their help instead of Allah’s” (Islam Online, September 25). The shaykh also used his website to line up a series of Shiite scholars who announced they were “satisfied” with the shaykh’s “clarification” that Shiites are indeed Muslims (Islam Online, September 20). Nevertheless, al-Qaradawi has continued his attacks on Iran and Shi’ism, telling an Arab daily that Iranian money is behind the spread of Shi’ism; “Money definitely plays a role but I cannot say that every person who backs Iran has been paid by them and I cannot accuse everyone of this. There are people who were paid and continue to be paid and there is shuttling between them and Iran. This is known.” (Al-Sharq al-Awsat, September 25). In a second interview with al-Masry al-Youm, al-Qaradawi declared, “I do not care and I am not shaken by this stir. I made this statement to answer to the dictates of my conscience and religion and responsibility… I am trying to pre-empt the threat before it gets worse. If we let Shiites penetrate Sunni societies, the outcome won’t be praiseworthy. The presence of Shiites in Iraq and Lebanon is the best evidence of instability” (al-Masry al-Youm, September 23).