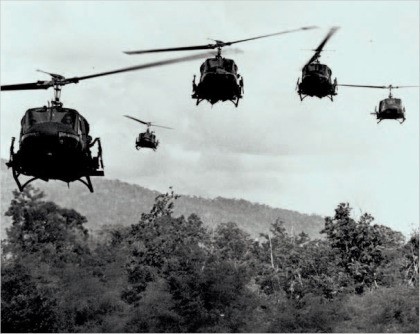 While the Western press has been occupied recently with accounts of fraudulent elections in Afghanistan and the alleged role of President Hamid Karzai’s brother as a paid CIA agent, a stranger but perhaps more instructive story was playing out in Afghanistan that reveals the rather shallow penetration NATO and Coalition efforts have made in building trust and confidence in that country, as well as giving some indication of what can be expected from a Karzai administration that does not sense full support from its former backers in the West as it begins a second term. In addition the controversy demonstrates the very different perceptions of the counterterrorism struggle in the West and in Afghanistan.

For several weeks now, Afghanistan has been consumed by stories of mysterious “foreign helicopters” ferrying Taliban fighters to a new front in northern Afghanistan. These helicopters are alleged by no less than President Karzai to belong to “foreign powers” such as the United States and its allies. The helicopters are said to land in remote regions, but their activity has supposedly been noted by nomads who travel through the deserts of Baghlan and Kunduz province (Hasht-e Sobh, October 13).

Without mentioning guilty parties or offering evidence, President Karzai suggested the reports of helicopters delivering terrorists to north Afghanistan were true, saying, “We have received reliable reports from our intelligence service. We have received reliable reports from our people, and today I received a report that these efforts [to transfer Taliban fighters] are also being made mysteriously in the northwest. The issue of helicopters has also been proved. We do not make any more comments now and investigations are under way to see to whom and to which foreign country these helicopters belong” (Tolo TV, October 11). According to Karzai, the “unknown” helicopters had been taking Taliban fighters to Baghlan, Kunduz and Samangan provinces in northern Afghanistan. The president’s remarks were quickly followed by a call from the Lower House speaker, Muhammad Yunis Qanuni, for a government debate on the issue. “When the president of Afghanistan, as the first man of the country, is raising a fact and a problem, then it shows that the problem is important and serious.” According to Takhar MP Habiba Danesh, the helicopter airlifts were already underway before the elections (Tolo TV [Kabul], October 13; Ferghana.ru, October 12; Hasht-e Sobh [Kabul], October 13).

Kunduz governor Muhammad Omar claimed the fighters being brought to his province at night were members of the Islamic Movement of Uzbekistan (IMU), a group that recently lost its longtime leader Tahir Yuldash and is now hard pressed by the Pakistani government in South Waziristan, their home since 2001. The governor pointed to the detention of 15 militants by U.S. Special Forces south of Kunduz, whom he described as supporters of the late Tahir Yuldash (Afghan Islamic Press, October 11; Eurasia.net, October 13). At the same time, the governor noted the security situation in his province was improving (Tolo TV, October 11). The governor of Baghlan province, Muhammad Akbar Barakzai, also claims to have received intelligence that unidentified military helicopters are making midnight landings in remote areas of his province (Tolo TV, October 21).

Dr. Abdullah Abdullah, Karzai’s former rival for the presidency, accuses the Afghan government of being behind the transfer of Taliban fighters to the northern provinces. “They have sent to the north of the country the most evil people, the most notorious and criminal people who are involved in killing the people of Afghanistan and crime against the people of Afghanistan… I have the names of these people; they sent them to the north by helicopters so that they carry out their mission. Is this a government?” (Tolo TV, October 11).

Iran’s state television network, Press TV, sought to exploit the controversy by adding a large number of details to the helicopter story in an October 17 report, all according to unnamed “diplomats”:

• The British Army was responsible for relocating Taliban fighters with Chinook helicopters to the northern provinces from Helmand province in south Afghanistan (though this might come as a surprise to critics of the UK’s Ministry of Defence, who have suggested the military has not provided enough transport helicopters to meet British needs – BBC, August 30).

• The death of Afghan interpreter Sultan Munadi in a  September British Special Forces raid that freed a New York Times reporter from Taliban captivity has already been a controversial issue in Afghanistan, with repeated calls for an inquiry into the circumstances of his death. Press TV claimed Munadi was killed during the raid by a British sniper because he had documents and photographs verifying the British role in the alleged airlift.

• American forces were supplying the Taliban militants in north Afghanistan with weapons seized during the 2001 invasion. Most date back to the era of Soviet occupation.

• Afghan Interior Minister Mohammad Hanif Atmar, a British educated Pashtun, was working under the direction of the UK. The Interior Ministry has funneled arms to the newly relocated Taliban through Pashtun police officers. The distribution of arms to Taliban fighters by the Afghan police was also reported by Kabul daily Arman-e Melli on October 13.

Not all Afghan officials believe in the nocturnal activities of the “mystery helicopters.” Amrullah Saleh, the chief of the National Directorate of Security (NDS – the Tajik-dominated national security agency), dismissed the helicopter reports, as did many other members of Afghanistan’s security services. Amrullah maintains that the reports are designed solely with the intention of reducing trust in Western forces engaged in Afghanistan (Hasht-e Sobh, October 13). Even a member of Karzai’s campaign team, MP Nur Akbari, noted diplomatically that the president’s assertions were “unexpected,” saying that security officials had not provided any such information in the past (Hasht-e Sobh, October 13). President Karzai’s endorsement of the “mystery helicopter” theory compelled U.S. ambassador to Afghanistan Karl Eikenberry to issue a clear denial of “the rumors about the reinforcement of the Afghan government’s armed opposition in the north by the U.S.A. These rumors are baseless” (Tolo TV, October 14).

Nevertheless, one Afghan daily reported widespread belief in the “mystery helicopter” phenomenon. “The people strongly believe that these helicopters belong to the British and U.S. forces. They also believe that these helicopters have transferred some armed residents of the neighboring provinces to northern provinces and the killing of several armed men from these areas in the north seem to confirm this issue” (Arman-e Melli [Kabul], October 13).

It was not long before the “mystery helicopters” were seen in Pakistan, where the “foreign allies” of the Tehrik-e Taliban Pakistan (TTP) were alleged to be rescuing Taliban militants from the government offensive in South Waziristan. An Islamabad daily reported the belief of “some experts” that the airlift was part of a deal between the Western nations and the so-called “good Taliban” (Pakistan Observer [Islamabad], October 19).

Existing rumors of a Western airlift of Taliban fighters were no doubt adopted and exploited by the Karzai administration to express its displeasure with the West’s refusal to rubber stamp his election victory, but they mask a more serious problem – how has the Taliban managed to expand its operations in the north and what can be done to stop it before the Taliban is in a position to interfere with vital NATO supply lines that cross the region? By endorsing such rumors, President Karzai appears ready to endanger years of Western civil and military efforts in Afghanistan if he feels it necessary to ensure his domestic political survival.