The Armed Forces of the Philippines (AFP) are restructuring their campaign against Abu Sayyaf Islamist militants in Western Mindanao by adopting the fleet marine concept as a replacement for the Sulu Archipelago-based Joint Task Force Comet (Sun Star Network, September 15). The make-up of the Philippine Republic presents a special challenge to internal security forces, as it is composed of 7,000 islands and islets spanning 60,000 square miles of sea.

The commander of the Western Mindanao Command (Wesmincom), Lieutenant General Benjamin Muhammad Dolorfino, described the fleet marine concept as an opportunity to use the sea as a maneuvering space rather than an obstacle. The transfer of assault operations to amphibious units will help level the intelligence-gathering battle, which the AFP has been losing to the militants’ intelligence network. According to Dolorfino, “We are so easy to detect with our ground operations. The whole island instantly knows [we are coming] just by the sound of a six-by-six truck revving up” (Sun Star Network, September 15). Landings from the sea will help restore the element of surprise to AFP operations.

The seas and waterways of the southwestern Philippines were once plagued with Muslim pirates – now these are part of the operational zone of Abu Sayyaf, a notorious composite Islamist terrorist group/criminal gang with deep roots in Western Mindanao, specifically the Zamboanga Peninsula and the islands of the Sulu Archipelago (most notably the island province of Basilan). Abu Sayyaf is light on ideology but capable of striking with brutal effectiveness and a callous disregard for civilian lives, as seen in the February 2004 bombing of Superferry 14 in Manila harbor, killing 116 people.

Though Abu Sayyaf has been pressured by U.S.-supported Filipino troops for several years, they still have the ability to lash back, as was seen in a September 16 ambush in which militants under the command of Nur Hassan Jamiri and Long Malat Sulayman killed three soldiers of the 32nd Infantry Battalion. Later in the day, however, a government mortar team zeroed in on the militants, killing two, including Commander Sulayman (Manila Times, September 17; Philippine Star, September 18). Police and Air Force intelligence agents have also recently captured long-wanted militants Bidung Ismael (a.k.a. Ben Ismael) and Jul Ahmad Ahaadi (a.k.a. Jul Puti) (Philippine News Agency, October 15; Philippine Daily Inquirer, September 8). Three days earlier, the Special Action Force of the Philippine National Police and the Directorate for Integrated Police Operations killed Sulu provincial leader Gafur Jumdail (a.k.a. Doc Abu) and two associates (Philippine Daily Inquirer, September 5). 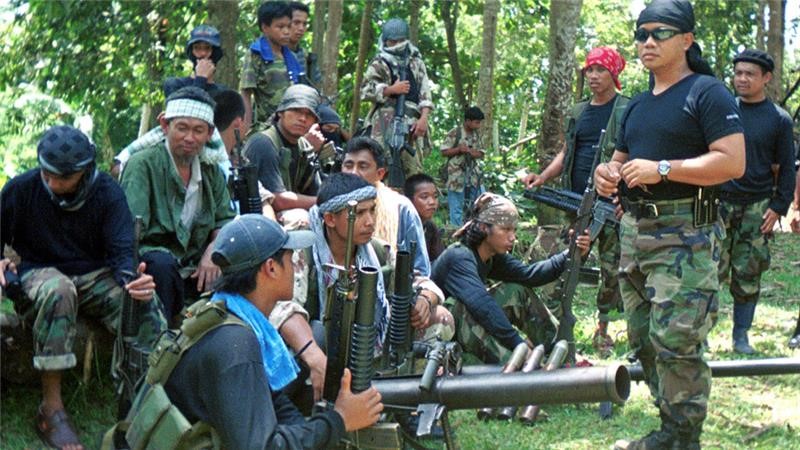 Created in 1950 for use against communist guerrillas, the 9,500 man Philippine Marine Corps (PMC) has already been active alongside the Philippines Army and police units in fighting against Abu Sayyaf terrorists in the southern province of Basilan, though they have been operating largely as infantry units (Manila Bulletin, March 21; ABS-CBN [Manila], December 19, 2008). The Marines are organized into three active-service brigades, a fourth reserve brigade, and a support and services brigade.

According to Rear Admiral Ernesto Marayag, current Marine amphibious assault operations are executed by small units carrying out “surgical strikes.” Marayag stated, “This is not the same as in the Saving Private Ryan film. We put in one or two teams or one company during the right time, under cover of darkness, because surprise is vital in any special operations” (ABS-CBN [Manila], December 19, 2008). Marine commander Brigadier Rustico Guerrero announced that 60 dogs of the military K-9 unit will also be deployed in hunting down ASG members (Pilipino Star Ngayon, September 8).

However, amphibious operations will be hampered by the absence of the surveillance and attack capabilities offered by helicopters – the Navy’s last helicopter crashed off Zamboanga nearly two months ago and the bidding for two new helicopters has been suspended due to suspected collusion between suppliers and defense officials (Philippine Daily Inquirer, October 5; Manila Standard, October 5). The Philippine Navy (Hukbong Dagat ng Pilipinas), to which the Marines belong, is in desperate need of modernization. Its 31 Second World War-era ships are generally conceded to be incapable of patrolling and securing the Philippines’ territorial waters (Manila Bulletin, July 27). 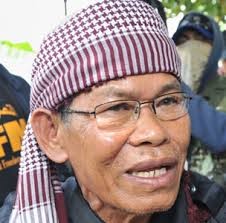 The 601st Brigade engaged the rebels with artillery, mortars and heavy-machine-gun fire from armored personnel vehicles (APVs). The rebels targeted the military with mortar and small-arms fire for eight hours before splitting into small groups and melting into a marshy area where pursuit was difficult (AFP, March 28). Government forces claimed at least 20 rebels were killed while admitting the loss of eight soldiers. An MILF spokesman insisted the rebels had suffered the loss of only one fighter while killing 20 government troops (MindaNews [Mindanao], March 28). The rebels also claimed to have destroyed two APVs and to have seized a weapons cache that included an M-60 machine-gun (Mindanao Examiner, March 27). Eid Kabalu, the MILF’s civil-military affairs chief, declared government troops “encountered our regular forces, not those under Kato” (Philippine Daily Inquirer [Mindanao], March 28).

Secretary of National Defense Gilberto Teodoro Jr. once said of Kato; “We know the way he thinks and the way he thinks is quite dangerous” (Philippine Daily Inquirer, October 2, 2008). Kato’s progress through remote areas of Mindanao is partially tracked through text messages sent to security forces by civilians (GMANews [Manila], October 2, 2008).

This article first appeared in the April 3, 2009 issue of the Jamestown Foundation’s Terrorism Monitor

According to the anti-terrorism branch of the Philippine National Police, a new funding network has been created to support the terrorist activities of the Abu Sayyaf Group (ASG) and the lesser-known Rajah Sulaiman Movement (RSM), a dangerous group of Filipino natives who abandoned Christianity for radical Islam after working in the Middle East. The new financing network, allegedly run by Saudi national Abdulrahman Qaussamulah, replaces an earlier network run by Osama Bin Laden’s brother-in-law Muhammad Jamal Khalifa, which was disrupted by a raid on the Islamic Information Center in Manila in 2005 (Philippine Daily Inquirer [Makati City], July 14). 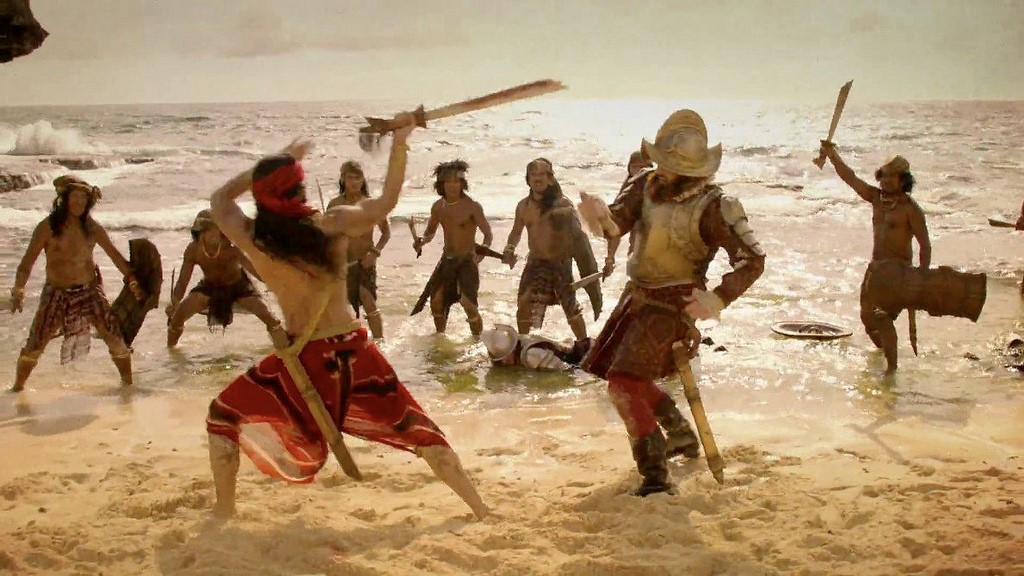 The movement is named for Rajah Sulaiman Mahmud, the last Muslim ruler of Manila, who fell battling Spanish invaders in 1571. The RSM is dedicated to the “re-Islamization” of the northern Philippines (AFP, December 21, 2005). The converts to Islam work closely with the Abu Sayyaf Group and Jemaah Islamiyah (JI), an Indonesian-based terrorist group with close ties to al-Qaeda. The Moro Islamic Liberation Front (MILF), currently in negotiations with the government, denies accusations that it has provided refuge for RSM operatives (Mindanao Examiner, December 11, 2006). Abu Sayyaf has also made efforts to recruit Christians from their operational area in Basilan Island and Zamboanga City (AFP, September 21, 2005). A movement known as Balik Islam is dedicated to converting Filipino Christians to Islam.

Seven members of the RSM, including current leader Ruben Pestano Lavilla Jr., were placed on the U.S. list of “Specially Designated Global Terrorists” in June (U.S. Treasury Department, HP-1030, June 16). The document cited RSM involvement in the February 2004 Manila ferry bombing that killed 116 people and the February 2005 Valentine’s Day bombing in Makati City that killed four people and wounded over 100. 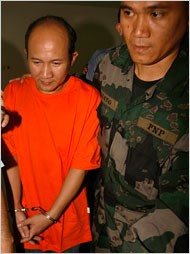 Ruben Pestano Lavilla Jr. after his arrest in August 2008 (NYT)

Lavilla replaced previous RSM commander Feliciano de los Reyes (a.k.a. Ustadz Abubakr), who was arrested in December 2006. Ricardo Ayeras (a.k.a. Abdul Karim), an important founding member of the RSM, was captured in August 2007. Ayeras later claimed to be a Catholic who was tortured into a confession at Camp Crame, the Quezon City headquarters of the Philippine National Police. RSM founder Hilarion del Rosario (a.k.a. Ahmed Santos) was arrested in Zamboanga City in October 2005 while stockpiling 600 kilograms of explosives for an alleged plot to bomb the U.S. embassy in Manila.

Many RSM members are believed to come from affluent families with connections abroad (AFP, January 23, 2007). Many speak Arabic and English as well as local languages and are able to mix freely in Manila and other major Filipino urban centers which are predominately Christian. An influential Filipino broadcaster and an audio consultant who worked with police were responsible for bailing out Dawud Santos (brother of RSM leader Ahmed Santos) in 2005 after he was arrested with 10 sacks of ammonium nitrate in his possession. The release reportedly left President Gloria Macapagal Arroyo infuriated (Remate [Manila], November 2, 2005).