With several military operations underway in the former colonies of French West Africa, Paris has decided to reorganize its deployments with an eye to providing a more mobile and coordinated military response to threats from terrorists, insurgents or other forces intent on disturbing the security of France’s African backyard.

France will redeploy most of its forces in Africa as part of the new Operation Barkhane (the name refers to a sickle-shaped sand dune). Following diplomatic agreements with Chad, Mali, Niger, Burkina Faso and Mauritania (the “Sahel G-5”), over 3,000 French troops will be involved in securing the Sahel-Sahara region in cooperative operations involving G-5 troops. Other assets to be deployed in the operation include 20 helicopters, 200 armored vehicles, 200 trucks, six fighter-jets, ten transport aircraft and three drones (Le Figaro [Paris], July 13). 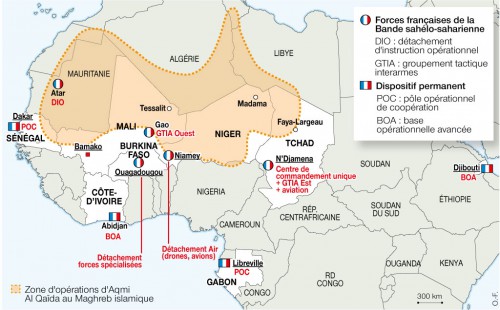 President Hollande made a tour of Côte d’Ivoire, Niger and Chad between July 17 to 19 to discuss the new security arrangements with political leaders, but also to promote French trade in the face of growing Chinese competition (Economist, July 19). In Niger, Hollande was met by a group protesting French uranium mining operations in that country (AFP, July 18). In a speech given in Abidjan, French president François Hollande declared that the reorganization of French military assets in Africa would enable “quick and effective responses to crisis… Rather than having heavy and unwieldy crisis bases, we prefer to have facilities that can be used for fast and effective interventions” (Nouvel Observateur [Paris], July 19).

The official launch of Operation Barkhane will come in the Chadian capital of N’Djamena on August 1. The operation will be commanded by the highly-experienced Major General Jean-Pierre Palasset, who commanded the 27e Brigade d’Infanterie de Montagne (27th Mountain Infantry Battalion, 2003-2005) before leading Operation Licorne in Côte d’Ivoire (2010-2011) and serving as commander of the Brigade La Fayette, a joint unit comprising most of the French forces serving in Afghanistan (2011-2012).

The initiation of Operation Barkhane brings an end to four existing French operations in Africa; Licorne (Côte d’Ivoire, 2002-2014), Épervier (Chad, 1986-2014), Sabre (Burkina Faso, 2012-2014) and Serval (Mali, 2013-2014). Licorne is coming to an end (though 450 French troops will remain in Abidjan as part of a logistical base for French operations) while the other operations will be folded into Operation Barkhane. Operation Sangaris (Central African Republic, 2013 – present) is classified as a humanitarian rather than counter-terrorism mission and the deployment of some 2,000 French troops will continue until the arrival of a UN force in September (Bloomberg, July 21). Some 1200 French soldiers will remain in northern Mali (Guardian [Lagos], July 15). Existing French military deployments in Djibouti, Dakar (Senegal) and Libreville (Gabon) are expected to be scaled back significantly, a process already underway in Dakar (Jeune Afrique, July 19). 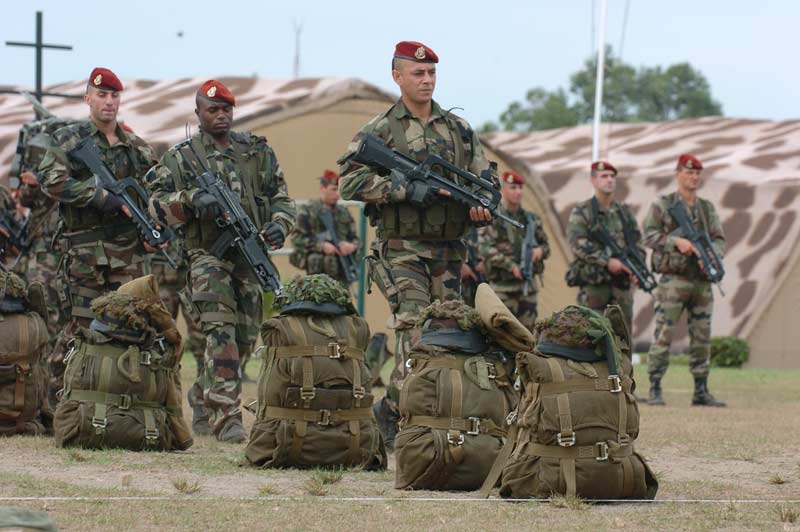 The force in Chad has been boosted from 950 to 1250 men. Chad will play an important role in Operation Barkhane – N’Djamena’s Kossei airbase will provide the overall command center, with two smaller bases in northern Chad at Faya Largeau and Abéché, both close to the Libyan border. Zouar, a town in the Tubu-dominate Tibesti Masif of northern Chad, has also been mentioned as a possibility (Jeune Afrique, July 19). Kossei will provide a home for three Rafale fighter-jets, Puma helicopters and a variety of transport and fuelling aircraft. Chadian troops fought side-by-side with French forces in northern Mali in 2013 and are regarded as the most effective combat partners for France in North Africa despite a recent mixed performance in the CAR. Four Chadian troops under UN command died in a June 11 suicide bombing in the northern Mali town of Aguelhok (AFP, June 11). Chadian opposition and human rights groups are dismayed by the new agreement, which appears to legitimize and even guarantee the continued rule of President Idriss Déby, who has held power since 1990 (RFI, July 19).

Intelligence operations will be headquartered in Niamey, the capital of Niger and home to French unmanned aerial vehicle (UAV) operations in West Africa. There are currently about 300 French troops stationed in Niger, most of them involved in protecting, maintaining and operating two unarmed General Atomic MQ-9 Reaper drones and an older Israeli-built Harfang drone (Bloomberg, July 21). The French-operated Harfang drones are being gradually phased out in favor of the MQ-9s, though the Harfangs saw extensive service during French operations in northern Mali in 2013. Three Mirage 2000 fighter-jets will be transferred from N’Djamena to Niamey. A French Navy Dassault Atlantique 2 surveillance aircraft has been withdrawn from Niamey with the conclusion of Operation Serval.

Small groups of French Special Forces will continue to be based in Ougadougou, capital of Burkina Faso, and at Atar, a small settlement in northwestern Mauritania. Other small bases are planned for Tessalit in Mali, which controls the road running between the rebellious Kidal region and southern Algeria, and in Madama in Niger, a strategic post near the Malian border that was the site of a French colonial fort. There are reports that French troops have already occupied the nearby Salvador Pass, an important smuggling route between Niger and Libya that appears to have acted as a main transit route for terrorists passing through the region (Libération [Paris], July 16).

French forces in the Sahel-Sahara region will continue to be targeted by Mokhtar Belmokhtar’s Murabitun group, which claimed responsibility for the death of one Legionnaire and the wounding of six others in a suicide bomb attack in northern Mali on July 15 (al-Akhbar [Nouackchott], July 16; RFI, July 17). Much of the ground element for Operation Barkhane is likely to be drawn from the French Légion étrangère and the Troupes de marine, the successor to the French Colonial Infantry.

The implementation of Operation Barkhane, an apparently permanent defense agreement with five former French colonies, raises a number of important questions, not least of which is what attitude will be adopted by Algeria, the most powerful nation in the Sahara-Sahel region but one that views all French military activities there with great suspicion based on Algeria’s 132-year experience of French occupation. There is also a question of whether the new defense agreements will permit French forces in hot pursuit of terrorists to cross national borders of G-5 nations without obtaining permission first. The permanent deployments also seem to present a challenge to local democracy and sovereignty while preserving French commercial and political interests in the region. For France, Operation Barkhane will enhance French ability to fend off Chinese commercial and trade challenges and allow France to secure its energy supplies while disrupting terrorist networks and containing the threat from southern Libya.

This article first appeared in the July 24, 2014 issue of the Jamestown Foundation’s Terrorism Monitor

Former Niger Delta militants have threatened to cut off Nigerian oil production in the event beleaguered Nigerian president Goodluck Jonathan is prevented from seeking re-election in 2015. Jonathan has been under intense criticism from northern politicians who cite incompetence in dealing with Boko Haram and other issues in their demands that the president decline to run for a second term. The declaration came out of a meeting in Akwa Ibom State of some 600 former militants who had accepted amnesty under the federal government’s Leadership, Peace and Cultural Development Initiative (LPCDI) in 2009 as part of a national effort to bring an end to militant activities in the Niger Delta region that were preventing full exploitation of the region’s abundant energy reserves.

Vandalized Pipeline in the Niger Delta

The leader of the ex-militants, Reuben Wilson, described a wide campaign in Muslim north Nigeria to discredit and distract the president, who is of southern and Christian origin:

You will agree with me that the Niger Delta people are sustaining the economy at great inconveniences and pains to its people and the environment. It is the only time that the region has had the privilege of producing a president for the country. It is unthinkable that the North will be plotting against our son, intimidating him with bomb blasts here and there and causing the untimely death of scores of innocent Nigerians, all because they want to take back power. We have always seen the need for us to live together as one indivisible country and this is what Mr. President believes in. However, with the way things are going, we have been pushed to the wall and we cannot but react. Accordingly, the former freedom fighters have agreed that all the routes through which the north has been benefiting from crude oil finds coming from the Niger Delta will be cut off, if they insist on forcing Mr. President out of office. (This Day [Lagos], July 1).

The declaration was reinforced by a pledge from the Niger Delta Youth Movement (NDYM) to organize a “million-man march” of Niger Delta youth in Abuja to condemn the “distraction” of President Jonathan from his development program by the terrorist activities of Boko Haram. NDYM leader Felix Ogbona insisted the movement would stop oil flows from the Delta if Jonathan is prevented from running for president in 2015 (Daily Independent [Lagos], June 29). According to the former militants, it was Jonathan (as vice-president) who visited the militants in the creeks of the Delta and convinced them to sign on to the amnesty in exchange for promises of development (Information Nigeria, May 2, 2013). The ex-militants see Jonathan’s efforts to develop the Delta being diverted by Boko Haram activities in the north and are certain such efforts will be dropped if a new president is elected from the northern Muslim communities in 2015.

Elsewhere, former Niger Delta militants belonging to the Ijaw people of the Delta demanded Jonathan (an Ijaw) declare his intent to run in 2015, saying in a statement:  We, therefore, call on you to contest the seat of the President. And if for any reason you fail to contest come 2015, you should not come back home but remain in Abuja forever” (Vanguard [Lagos], June 29).

Mansion Belonging to a Former Militant Leader in Yenagoa  (BBC)

While attacks in the Niger Delta and elsewhere continue to be claimed by “MEND spokesmen,” those militant leaders who accepted amnesty insist MEND ceased to exist in 2009: “Nobody should hide under the guise of a so-called MEND to sabotage the nation’s economy… We restate that the amnesty program of the Federal Government is working and those of us that are beneficiaries are happy that we were given the privilege to come out of the creeks to contribute to the peace and development of the country” (Vanguard [Lagos], October 24, 2013).

The amnesty has been granted to roughly 30,000 people since it began, promising each of them at least $410 per month to keep the peace in a program that costs upwards of $500 million per year (BBC, May 2). While lower-level militants have been offered job-training as they collect often-sporadic payments, there is abundant evidence that some former militant leaders have used access to major oil industry-related contracts to build enormous personal wealth that is typically flaunted through the construction of rambling mansions (Leadership [Abuja], June 30). The militant leaders who once targeted the Delta’s pipelines for oil theft or destruction now seek lucrative government contracts to provide security for these same pipelines (Information Nigeria, May 2, 2013).

Residents of the Niger Delta have complained for years that they see little benefit from the massive revenues generated by oil production in their region while enduring industrial pollution, poor infrastructure and a shortage of employment opportunities.

This article first appeared in the July 10, 2014 issue of the Jamestown Foundation’s Terrorism Monitor.

A Cairo-based extremist group using the name Ajnad Misr (Soldiers of Egypt) has intensified its bombing campaign in the Egyptian capital with a surprising attack on the Ittihadiya Palace in Heliopolis, the home of Egyptian president Abd al-Fatah al-Sisi. The bombing was part of the movement’s “Retribution for Life” campaign, apparently mounted in support of pro-Muhammad Mursi/Muslim Brotherhood demonstrations in the capital met with ruthless responses by Egyptian security forces that have left hundreds dead. Ajnad Misr refers to Egypt’s police as “criminals” who carry out “massacres” and has made them the main target of their bombing campaign so far (Ahram Online [Cairo], April 3).