Yemen’s al-Qaeda in the Arabian Peninsula (AQAP) has claimed that its September 30 attack on a military base in eastern Yemen was focused on the destruction of an American drone operations command-and-control room. In its statement, AQAP said that its attack was directed against an “intelligence and operations room” at the Mukalla air base and promised that further attacks on American drone installations would follow: “Such joint security targets, which participate with the Americans in their war on the Muslim people, are a legitimate target for our operations, and we will puncture these eyes that the enemy uses” (Shumukh al-Islam, October 14). However, Yemeni officials denied that any American drone operations room existed at the base, saying the command-and-control room there was dedicated exclusively to anti-piracy operations in the Arabian Sea (Reuters, October 14).

AQAP’s claim referred to an attack by Islamist militants on the headquarters of the Yemen Army’s Second Military Region at the port of Mukalla, capital of Yemen’s eastern Hadramawt governorate. The operation began with the detonation of a car-bomb at the entrance gate of the base, followed by the infiltration of militants disguised as Yemeni Special Forces personnel (Saba [Sana’a], September 30; Yemen Post, October 3). The tactic created massive confusion at the base, allowing the militants to seize a number of soldiers as hostages before taking taking refuge in a three-storey building.

The military responded with a fierce counter-attack that deployed Special Forces troops from Sana’a using RPGs, missiles and fire from four tanks that destroyed much of the installation during a three-day standoff. Four soldiers were reported killed and nine wounded in the effort to re-take the base from Islamist militants who claimed to have killed dozens of officers in the initial attack (Mukalla2011.net, October 1; Felix News Agency, October 5; Reuters, October 14; Yemen Post, October 3).

The attack came only days after AQAP strikes in southern Yemen killed 31 soldiers and policemen in southern Yemen (Reuters, September 30). Other air bases have been targeted by AQAP this year, including al-Anad airbase in Lahj governorate, where three pilots were killed by gunmen on motorcycles only days after the base’s gas tanks were set ablaze (Yemen Times, May 9).

Not long after the attack on the Hadramawt military headquarters, a senior intelligence officer was killed in Mukalla on October 10 (Yemen Post, October 11). AQAP’s assassination campaign has claimed the lives of some 90 senior officers of Yemen’s security forces since the 2011 uprising against the regime of former president Ali Abdullah Saleh (Yemen Observer, September 1).

Despite the president’s enthusiasm for armed drones, there have been calls in Yemen for a review of the nation’s counterterrorism strategy to address the root causes of Islamist extremism rather than continuing the pursuit of an exclusively military response. In Hadramawt, the influential Imam Abu al-Harith Omar bin Salim Bawazir has claimed some success in persuading militants to abandon al-Qaeda’s ideology and “distorted” approach to Islam, though he complains of a lack of support for these efforts from authorities (Yemen Post, October 11). Local human rights groups in Hadramawt have also complained of the “negative effects” of American drone strikes in the region (Mukalla Online, October 10). Yemeni sources indicate that over 30 American drone strikes on suspected militants have taken place in Yemen since the beginning of the year (Felix News Agency, September 1).

While the internal debate in Yemen over the use of American drones continues, the Sahelian nation of Niger has requested the deployment of American armed drones in that country to “collect intelligence and conduct operations” against Islamist militants who took refuge in Niger after being driven out of northern Mali by joint French-African Union military operations (Reuters, September 19).

This article first appeared in the Jamestown Foundation’s Terrorism Monitor on October 18, 2013

As Lebanon’s Shiite Hezbollah movement and the Israeli Defense Force (IDF) continue on what seems an inevitable path to a new round of open conflict, a report has emerged claiming Hezbollah’s armed wing has recently received a number of Iran’s most advanced unmanned aerial vehicles (UAVs), courtesy of the Iranian Revolutionary Guard Corps (IRGC) (al-Siyasah [Kuwait], November 6). 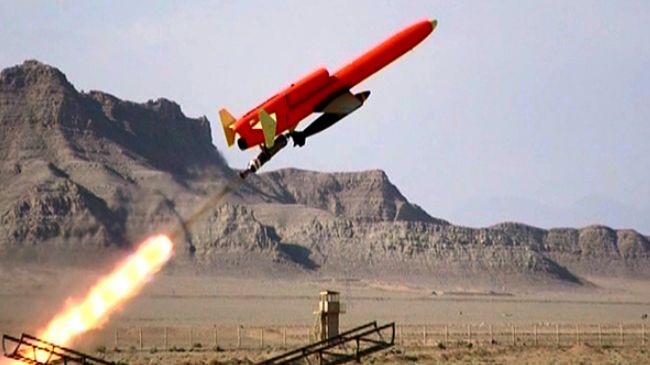 The report claims that sources close to high-ranking members of Hezbollah’s military force have revealed the movement has taken possession of three types of Iranian-supplied UAVs. These include Chinese-made drones, Iranian-made Ra’d (“Thunder”) drones and, most importantly, the Iranian-made long-range Karrar drones, introduced on August 22. According to the sources, these weapons are being kept in the Bekaa Valley of east Lebanon.

The Karrar (“Striker”) is a turbojet-powered drone capable of long-range reconnaissance and attack missions with a flight range of 1,000 km at low or high altitudes and a flight speed of 900 to 1,000 k/p/h, according to Iranian Defense Minister Brigadier General Ahmad Vahidi (Defense Update, August 24). The four meter-long drone can carry two 115 kilogram bombs or a guided missile of 227 kilograms and can be deployed on the back of a truck to a ground-launch position where it can be fired with the aid of a jet-fuelled take-off system. Mobility is an important consideration for Hezbollah, all of whose territory is within easy range of Israeli aerial counterstrikes. The response time of Israeli warplanes to mobile missile launches during the 2006 conflict was typically less than ten minutes, leaving little time for launch crews and equipment to clear the area. The Karrar can be retrieved by its operators through the deployment of a rear-mounted parachute.

Israel is preparing a multi-level missile defense system, with the new Iron Dome system expected to provide a defense against short-range rocket attacks. The Iron Dome system, however, is very complex and training its military operators has proven a larger challenge than anticipated, causing a delay in deployment.  Its manufacturer, Rafael Advanced Defense Systems, has developed a cheaper and simpler version of the system called “Iron Flame.” This stripped-down surface-to-surface missile system can carry a variety of different warheads for various missions (Defense Update, November 10). The Israeli press quoted senior Israeli military sources as saying Iron Dome will now be deployed only in the case of massive rocket attacks from Gaza or south Lebanon (Jerusalem Post, November 8). The disparate cost between the complex Tamir interceptor missile used in the Iron Dome system and the cheap Qassam or Katyusha rockets it is meant to destroy is a major concern in deciding when and where to deploy Iron Dome.

Should reports of Hezbollah’s new drone be accurate, the question is whether these weapons have been supplied for Hezbollah’s use in retaliation against a new Israeli offensive or whether their deployment is intended to make them available in response to an Israeli or American strike on Iran’s nuclear facilities. It is important to note that this latest report suggests that, as in the case of earlier Iranian supplies of advanced weaponry to Hezbollah, the new UAVs remain under the control of the IRGC trainers assigned to their management and cannot be used without the direct authorization of Supreme Leader Ayatollah Syed Ali Hoseyni Khamene’i.

Al-Siyasah is a firm opponent of Iran and Lebanon’s Hezbollah. It has reported in the past that the core al-Qaeda leadership is based in Iran and that Hezbollah is stockpiling Iranian-built chemical weapons (al-Siyasah, June 7, 2010; September 3, 2009). Neither allegation has been confirmed.