This is the second of a two part series on Islamism and Terrorism in Darfur.

The conflict in Darfur is closely tied to the War on Terrorism, largely because the influence of the U.S. to deter ethnic and political violence in the region has been compromised by its growing security alliance with Sudan’s ruling Islamists. Despite meager popular support, the now divided Islamist faction continues to dominate both government and opposition in Khartoum. The radical racial and religious policies of this group have resulted in a shocking tally of death that far surpasses anything committed by al-Qaeda. The price of security cooperation with Sudan’s rulers is the risk of complicity in the brutal destruction of an ancient culture that once rivaled the kingdoms of the Nile. 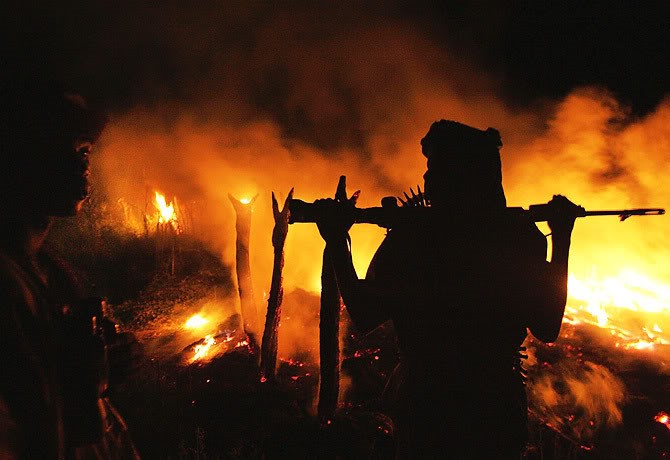 Although it has been a decade since al-Qaeda operated within Sudan, the nation has been an important recruiting ground with its pool of young men indoctrinated in the government’s jihadist ideology. For now, the insularity of Sudanese Islamism and a distrust of ambitious foreigners preclude active al-Qaeda involvement in the Darfur conflict, but a sudden break in the security partnership with the U.S. could see a return of foreign militants.

Sudan’s western province is widely viewed in Khartoum as a proxy battle-ground for the continuing struggle by President al-Bashir and the security apparatus against Hassan al-Turabi’s Islamist following. Indeed, the terror that has descended on Darfur reveals a shocking cynicism both on the part of the government and the leading opposition party. The atrocities of the government-backed Janjawid militias have occurred under the cover of negotiations to end the war in South Sudan, which no party (especially the United States after its considerable diplomatic investment) wishes to derail. The growing relationship between the CIA and the Sudanese security chiefs (some of whom were named in Congress as suspects in Darfur war-crimes) has effectively sidelined U.S. influence in Darfur. The main groups involved in the fighting in Darfur are described below.

The development of the Janjawid is a direct consequence of the ethnic composition of the Sudanese regular army. For decades the regular Sudanese army has been largely formed (60-65%) from Kordofan Nubas and recruits from Darfur. Despite the civil war, the Sudanese army also relies on a large number of troops from the south. For all the rhetoric of jihad in Khartoum, service in the military appeals to few of the Nile-based Arabs who control the political process. With the Darfur troops considered politically unreliable in fighting their kinsmen, the government sought an alternative fighting force in Darfur that could be motivated by racial hatred.

Most Janjawid are drawn from the northern camel-raising Arabs who have suffered most from the disappearance of pasturelands. There are allegations that the Sudanese government has recruited Janjawid from the “Arab” tribes of Chad (such as the Salamat). The Janjawid also recruit from the Fellata population, Muslim migrants from West Africa who are receptive to the message of Islamism. Many Janjawid are simply common criminals, reliable for the dirty work and expendable when international pressure forces a round of arrests. Few, if any, of the Janjawid come from the powerful Baqqara Arab tribes of South Darfur. The Janjawid number about 15,000 – significantly larger than both rebel groups.

Save for the AK-47s and satellite-phones, the horse and camel-mounted Janjawid militias most resemble traditional raiding parties. The tools of the Janjawid (“Devils on Horseback”) include massacres, torture, mutilation and gang-rape. Their main victims are the Fur, the Masalit and the Zaghawa, all of whom once presided over sultanates on the territory of modern Darfur. Janjawid units are expected to pay themselves through the proceeds of looting. Motorized units of the regular army often assist Janjawid raids. Khartoum’s ancient fleet of Antonov bombers has been put to use in Darfur, dropping crude barrel-bombs full of explosives and scrap metal to soften up villages before Janjawid attacks. The use of government helicopter-gunships was common earlier in the conflict before several helicopters were lost to rebel fire.

Janjawid leader Musa Hilal is the son of a leading Jalul Rizayqat shaykh with a long career as a militant/brigand. He was released from prison to take command of the militias. Hilal claimed in an interview with Human Rights Watch that senior officers of the Sudanese regular army led all Janjawid field operations. After being recalled to Khartoum, a reinvented Musa Hilal has emerged as a traveling ambassador of peace and reconciliation, urging Darfuris to unite through intermarriage. This goodwill effort seems tied to attempts to make elements of the Janjawid “disappear” by incorporating members into the police and Popular Defense Forces (a government paramilitary). Undisciplined Janjawid forces are even reported to have engaged in fighting with the regular army.

The SLA is composed mostly of Zaghawa and Fur, with representation from the Masalit, Daju and other tribes. The origins of the movement can be found in the self-defense militias created by the Fur in the late 1980s. A Fur lawyer, Abdul-Wahid Muhammad al-Nur, created the Darfur Liberation Front (soon renamed the SLA) in 2002 and armed the group by raiding a police station. Minni Arkou Minnawi, a leader of the secular, left-wing SLA maintains that the movement is not separatist in nature, but has specific demands regarding aid, development, political recognition and the insertion of international peace-keepers. The movement espouses a nationalist approach in which Sudan’s remoter regions would receive the same attention as the Nile corridor.

Like most armed groups in the field (including the regular army) the SLA feeds itself at the expense of civilian farmers. Funding for arms comes largely from Fur communities in the Persian Gulf States and other parts of the Sudan. The guerrillas operate in groups of four-wheel drive vehicles mounted with heavy machine-guns over ground they know intimately. The SLA aspires to the highly-mobile tactics used so successfully by the northern tribes of Chad to expel the Libyans, but more closely resemble the low-level military activity of the similarly equipped 1990s Tuareg rebellion in Mali and Niger.

In early 2004, the SLA joined the National Democratic Alliance, a fractious grouping of the southern SPLA and various northern opposition parties. [1] The SLA also signed a cooperative agreement with the Beja Congress, a long established militant group in Sudan’s eastern region representing Muslim non-Africans complaining of similar underdevelopment and under-representation in the central government. The accord was signed in Eritrea, which has also been accused by Khartoum of providing military assistance to the Darfur rebels.

The government describes the Islamist JEM as the military wing of the PCP, but so far JEM has proved less militarily effective than the SLA. The movement is led by Dr. Khalil Ibrahim Muhammad, a Turabi loyalist and author of The Black Book: Imbalance of Power and Wealth in the Sudan, an outlawed manifesto that claims the Nile-based Arabs have dominated the government since independence at the expense of the majority of Sudanese. JEM units cooperated with SLA forces in the opening phase of the rebellion in February 2003. For a time the government tried to negotiate a separate agreement with the SLA, but the SLA demanded that both parties be part of the peace process.

Like the SLA, JEM finds many eager recruits in the refugee camps of Chad. Like the Janjawid, JEM also draws recruits from the Fellata population, which was not granted citizenship until 1989 under an al-Turabi initiative. Islamism has a small but fervent constituency of recent vintage in Darfur. Islam as practiced in Darfur is highly different from the Islamist orthodoxy of Khartoum, incorporating many traditional customs and beliefs. It is unlikely that all of JEM’s guerrillas back the Islamist project, but may have found in the organization the means to obtain the weapons and vehicles needed to take revenge for the loss of farms and families. Most of the JEM funding is believed to come through Turabi’s organization. In early May, both the JEM and the SLA appealed to Muammar Qaddafi for funds and political support. Of late Qaddafi has abandoned Arabism for the cause of African unity and identity.

The Sudanese government has considerable military power that would enable it to restore order in Darfur, but is understandably reluctant to divert its resources from the South until the peace process there has been completed. Offers of peacekeeping assistance from the SPLA have been met with charges of SPLA military aid to the rebels in Darfur. The strategy of the Sudanese security forces in Darfur follows a pattern established in the war in the South; divide the opposition through bribery and the inflammation of ethnic or tribal differences while arming pro-government militias. The resulting death or displacement of the population eventually isolates rebel units from sources of support.

In some sense the people of Darfur are being made to pay the price for the private humiliation of Sudan’s security apparatus, resentful that it has had to come to the negotiating table with the South Sudan’s SPLA. The terms of the peace settlement with the SPLA virtually ensure further revolts elsewhere in Sudan to wring similar considerations from the highly centralized government in Khartoum. Unfortunately, the manipulation of race and Islam is likely to continue to substitute for a willingness to create an equitable distribution of wealth and power.