Nadirskhaykh Khachilayev’s car was approaching his home in Makhachkala when a passing Lada motorcar opened fire with machine-guns, killing the 44-year-old leader of the Lak community. Police claimed their investigation led to three unidentified Chechen suspects after finding a burnt-out Lada on the outskirts of Makhachkala. While it is possible the Lak leader was the victim of a political assassination, he may have been the victim of a blood feud, arising after the deaths of several ethnic Dargin policemen in the 1998 Islamist assault on Parliament. 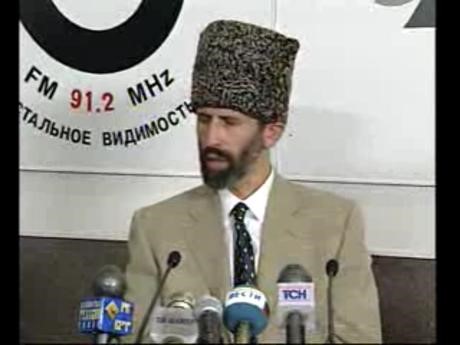 The Khachilayev brothers seized on ethnic politics to build their political base during the years of uncertainty following the demise of the Soviet Union, providing the muscle for the Lak community’s Tsubarz movement. Using the revenues of their criminal activities, the Khachilayevs armed and equipped the Lak national movement during the Novalakskii dispute. The land belonging to Akkin Chechens, deported from Dagestan’s Aukhovskii rayon in 1944 had been given to Laks and Avars, and the area renamed Novolakskii rayon. The resettled Laks became the victims of a 1991 Russian policy to resettle internally exiled peoples, including the Akkin Chechens. Following a brief armed confrontation, the Khachilayevs proposed a compromise that was accepted by all parties. The settlement served to propel the Khachilayevs to the leadership of the Lak movement.

The Laks are an indigenous Caucasus group, believing themselves to be descended from an eighth century Syrian Arab governor of Dagestan. They were the first group in the area to convert to Islam after the conquest of Abu Maslama in 733. This early conversion may be only legendary, but by the 15th century the Laks were spreading Islam throughout Dagestan, becoming known as Ghazi-Ghumuqs, “warriors for Islam.” The Lak are one of 14 ethnic groups receiving equal representation in the Daghestan State Council. 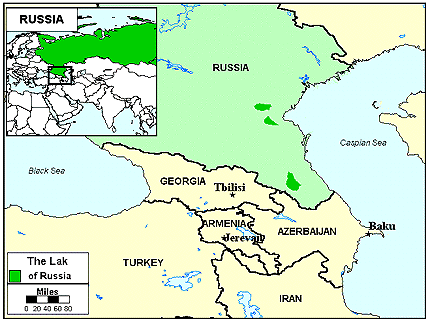 In 1994 the Dargin group succeeded in having their nominee, Magomedali Magomedov, appointed to the post of Chairman of the State Council. Charges of corruption and ethnic favoritism began almost immediately. Ironically, some of the strongest charges came from the leaders of Dagestan’s powerful ethnic mafias, including the Khachilayev brothers. Publicly, Khachilayev posed as a corruption-fighter, and had embarrassed the government in recent years by collecting incriminating documents. When nothing came of his campaign, he declared himself retired from politics. After his acquittal on charges of illegal arms possession in March 2002, Khachilayev re-entered politics, alleging government responsibility for 35 unsolved political murders.

Despite having only scant knowledge of Islam, Nadirshaykh took the leadership of the Union of Muslims of Russia (SMR) in 1996 and embarked on an ambitious program to promote himself as the leader of Russia’s Muslim community. In the same year he became a member of the Russian Duma. Dagestan’s religious community, deeply divided by schisms between various tariqas (Sufi orders) and Salafist reformers, has failed to generate any widely accepted leaders, allowing populist politicians such as Khachilayev to assume roles as ‘Islamic’ leaders. As the Khachilayevs and other Laks gained prominence in Dagestan’s political system, Nadirshaykh began to dabble in separatism. In May 1998 Magomed and Nadirshaykh joined forces with the Avar national movement and others to seize the Daghestan Parliament building in Makhachkala in the name of Islam. The leaders described the event as a protest against Daghestan’s corruption and feudalism rather than a coup d’état. These few hours under arms led to the dissolution of the SMR and criminal charges for the Khachilayevs. Though found guilty, the brothers were given suspended sentences and later amnestied. Magomed was murdered by one of his bodyguards in 2000.

After 1991, Lak resentment of Avar and Dargin domination of official Islamic structures increased. Khachilayev was instrumental in arranging the 1996 peace negotiations that ended the first Chechen conflict, one of many times in which the Khachilayevs were used as mediators by Moscow. Following the war, Khachilayev established contacts with figures like Muammar Khadafi, Saddam Hussein and Louis Farrakhan while calling for an Islamic state in Dagestan.

Beginning in 1998, there were attempts to establish autonomous ‘Wahhabi’ enclaves governed by shari’a . Dagestan relies overwhelmingly on federal subsidies from Moscow that would be endangered by any local separatist movement. The radicals of the Jama’at al-Islamiyun al-Daghestani led by Bagauddin Kebedov were opposed not only by traditional Sufis, but also by elements of the Dagestani mafia, who had suffered from local Wahhabi anti-crime campaigns. The jama’at declared jihad against Daghestani authorities in 1998. Though there were reports Khachilayev was actively involved in fighting on the Wahhabi side during the 1999 incursion by al-Khattab and Shamyl Basayev, he vigorously denied them. Criminal charges of armed insurrection were eventually dropped for lack of evidence, but there were reports that Basayev sentenced Khachilayev to death for failing to rally Daghestani Muslims to their cause. It is unlikely, however, that Basayev now has the time to indulge himself in assassinations that have no effect on the Chechen conflict.

In an interview done shortly before his death, Khachilayev was in a pessimistic mood regarding the future of Islam in Dagestan: “The people are not ready yet to accept a Shari’a state, they are afraid of the word ‘Shari’a’, they think that it is something very harsh and scary.”

Though Khachilayev’s political influence had waned greatly, he was reported to be contemplating another run at the State Duma despite warnings not to do so. Khachilayev himself often said that Russian security forces were preparing to kill him. Chechen rebel sources report that the Russian-backed Chechen National Guard leader Sulim Yamadayev fulfilled a four year old contract on Khachilayev’s life, in an attempt to instigate fighting between Laks and Chechens in the still volatile Novalak rayon. Lak leaders have already promised revenge for Khachilayev’s death, ensuring Dagestan’s cycle of political murder will continue.