Political reverberations from the revolutions in Tunisia and Egypt continue to sweep through the Horn of Africa, which has already witnessed demonstrations against the Transitional Federal Government and its Islamist opponents in Somalia (see Terrorism Monitor Briefs, February 17). Now militants belonging to Ethiopia’s Oromo Liberation Front (OLF) have called for all of Ethiopia’s ethnic and religious groups to emulate the Tunisian and Egyptian revolts and unite in deposing the Tigrayan-dominated government of Prime Minister Meles Zenawi, leader of the Tigrayan People’s Liberation Front, the major element of the ruling Ethiopian People’s Revolutionary Democratic Front (EPRDF) coalition. 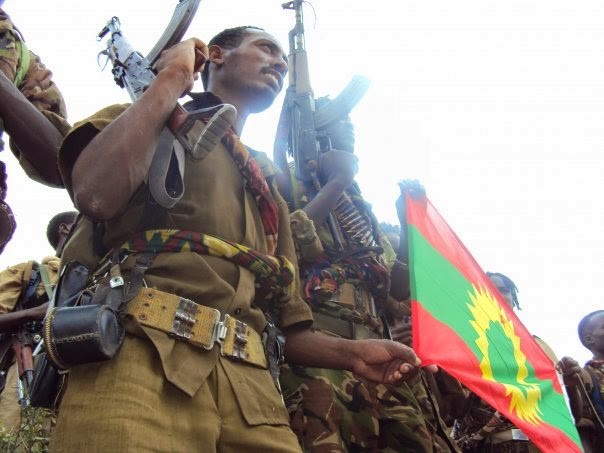 Rebels of the Oromo Liberation Front

In a statement broadcast in both Afan Oromo and Amharic, the OLF maintained that only a revolution in the streets could command the attention of the West: “Until [Addis Ababa] becomes the next Tunis or Cairo, their ears will not listen,” though “most of the superpower countries, the hitherto supporters and handlers of the tyrannical regimes, were forced to quickly abandon their darlings and side with the people in revolt.” Most importantly, the Oromo must unite with Ethiopia’s Amharic speakers to provide a long-term solution to the country’s ills (Jimma Times, February 27).

The Oromo are the largest single ethnic group in Ethiopia and dwell principally in central and southern Ethiopia, though there is a high degree of social integration with Ethiopia’s Amharic-speaking peoples, the traditional rulers of the nation until 1991. The Oromo are religiously diverse, with members of the ethnic group following Islam, Christianity and traditional religions, but not all Oromo opposition leaders and parties agree on the necessity of a revolution.

In recent days, a joint operation along the border by Ethiopian and Kenyan military forces that began last November is reported to have resulted in the arrest of at least 120 OLF fighters and the seizure of a quantity of arms, grenades and missiles. The existence of a cross-border Oromo community is reported to have complicated efforts to identify OLF members; according to a local Kenyan provincial commissioner, “These people speak the local dialect and it may be hard to distinguish them from the locals but the locals themselves are volunteering information that will lead to their arrest.” The operation will continue to search for other OLF members (Sudan Tribune, February 26).

The OLF began an armed struggle for Oromo self-determination and local autonomy from the Amhara monarchy in 1973. After dropping out of the coalition government formed after the conclusion of the Ethiopian civil war and the fall of the communist Derg regime of Mengistu Haile Mariam in 1991, the OLF then took up arms against the new Tigrayan-dominated government. Addis Ababa classifies the OLF as a terrorist organization and has accused it of being responsible for a series of bombings in Addis Ababa in 2008, a claim denied by the OLF (see the OLF statement published in the Sudan Tribune, May 29, 2008).

Despite assertions by Ethiopian authorities that the military capabilities of the OLF and its armed wing, the Oromo Liberation Army (OLA), have been much diminished by constant pressure from government security services, the movement recently claimed that a special unit of the OLA operating in the OLF’s so-called “Eastern Zone” raided and destroyed a government military base in Kombolcha, killing 19 soldiers and injuring 25 others (Voice of Oromo Liberation Radio, February 25; OLF News, February 26; for OLF military capabilities, see Militant Leadership Monitor Briefs, January 29, 2010). The attack and the alleged casualties have not been confirmed by government sources. Kombolcha is 12km from the commercial center of Harar. The OLA has also claimed responsibility for the February assassination of a government intelligence official in the Eastern Oromia district who was accused of harassing members of the local Oromo community. An OLA statement warned: “Those who continue to be part of the TPLF killing machine will face the same death penalty unless they refrain from such evil acts” (OLF News, February 6; Jimma Times, February 9).

During the month of May, Ethiopia faced a series of attacks from its own ethnic-based rebel groups. The attacks come as a consequence of its invasion of Somalia last December, as the groups are attempting to take advantage of the Ethiopian army’s entanglement. The U.S.-backed government of Ethiopian Prime Minister Meles Zenawi now faces a new phase of armed resistance in the Muslim Ogaden region, which occupies nearly a third of modern Ethiopia and is home to four million ethnic Somalis. The recent discovery of substantial oil and mineral resources in the Ogaden region has complicated an already long-standing dispute over the territory’s status. In the Ogaden, China and Malaysia are intent on reproducing their success in dominating Sudan’s oil industry. 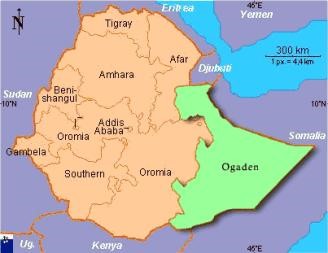 The Orthodox Christian Amhara and Tigrean ethnic groups form 40% of Ethiopia’s population and have traditionally formed the power base for the Ethiopian government. Zenawi’s Tigray People’s Liberation Front (TPLF) is the leading element in the coalition government, known as the Ethiopian People’s Revolutionary Democratic Front (EPRDF). In May 2005, the EPRDF reassessed the results of a general election in which the regime was apparently defeated. The recount resulted in an EPRDF majority, and opposition to the result was ruthlessly repressed. Opposition forces regularly point out that most senior government positions are in Tigrean hands, even though Tigreans represent only six percent of Ethiopia’s population of 75 million.

Political violence has afflicted the Ogaden region since its conquest by Ethiopia in the late 19th century. Ethiopia is determined to avoid a repetition of the Ogaden War of 1977-78, which began when Somali dictator Siad Barre committed four mechanized brigades in support of ethnic-Somali separatists in the Ogaden. An airlift of military equipment and aircraft from the Soviet Union and the deployment of 10,000 Cuban regulars allowed the Ethiopians to repel the invasion after more than a year of intense fighting. Today, the armed resistance is led by the Ogaden National Liberation Front (ONLF).

The Ethiopian government’s presence in the Ogaden has been almost entirely military in nature since its conquest, with little effort extended to develop the region. Ogaden human rights groups complain of the brutal military rule that has disrupted traditional social systems and devastated the local economy (Ogaden Human Rights Committee, Press Release, April 29). The government has also been accused of mismanaging local wildlife resources, exploiting limited water resources and allowing the charcoal industry to raze the region’s forests. The people of the Ogaden have also been denied a voice in the development of promising mineral and petroleum deposits. Contracts are negotiated in Addis Ababa, and the exploration companies arrive with large detachments of government troops. Last November, Swedish oil company Lundin Petroleum was warned by the ONLF that its exploration activities in the Ogaden were “both unrealistic and unwelcome.” The ONLF advised foreign exploration companies that Ethiopia does not control the Ogaden and that their security guarantees are worthless (Afrol News, November 14, 2006). Malaysia and India, likewise, have oil exploration firms active in the Ogaden region.

On April 24, the ONLF’s “Dufaan” commando unit attacked a well-guarded Chinese-managed oil exploration site near Obala in the northern Ogaden region, resulting in the deaths of 65 Ethiopian soldiers. Nine Chinese workers were killed while a further seven were abducted “for their own safety,” but released a week later (ONLF Communiqué, April 24). After the attack, Ethiopia’s parliament blamed the ONLF’s backers in Asmara, accusing the Eritrean regime of engaging in “international terrorism activities” (Ethiopian News Agency, May 10). According to rebel sources, the ONLF followed up its oil-field attack by taking the town of Kefalo on May 15 (http://www.oromoliberationfront.org).

The ONLF accuses Prime Minister Zenawi of currying favor from Western states by presenting himself as an ally in the “war on terrorism” and by suggesting that the ONLF has ties to al-Qaeda. The ONLF denies using terrorism, emphasizing that the movement restricts itself to attacking only legitimate targets of the regime.

The ONLF has entered into an alliance with the Oromo Liberation Front (OLF) to confront “Abyssinian colonialists.” Unlike the Somalis of the Ogaden, the indigenous Oromos have mixed with their Amharic neighbors since the 17th century. Today, Oromos can be found in all parts of Ethiopia and many modern Ethiopians are at least part Oromo. Not all Oromos support the creation of an independent “Oromia”—the Oromo People’s Democratic Organization remains part of the EPRDF ruling coalition. With nearly equal numbers of Orthodox Christians and Muslims (and a small Protestant minority), the Oromo movement is nationalistic rather than religious in character. The OLF encourages all of Ethiopia’s disparate opposition groups to join a new umbrella group, called the Alliance for Freedom and Democracy.

Rebel reports claim that a joint OLF/ONLF operation in the Ogaden’s Warder province killed 82 government soldiers and wounded a further 75 during six days in May (Voice of Oromo Liberation, May 17). The Ethiopian government denied these reports, describing them as simple attempts to gain media attention (Daily Monitor [Addis Ababa], May 23).

Ethiopia is following an ambitious long-term project to become a major East African energy supplier through oil exports, to construct five major hydroelectric dams and to provide a connection between the North African and South African power grids. In the meantime, the Zenawi government depends on U.S. support for its survival. The armed resistance has perceived a window of opportunity, as a large number of Ethiopian troops and military resources remain engaged in Somalia and are unable to withdrawal without the arrival of a larger African Union peacekeeping force than the 1,500 Ugandans already deployed.

Despite the TPLF regime’s characterization of opposition movements as “terrorist” in nature, neither the ONLF nor the OLF appear on the U.S. or EU lists of designated terrorist organizations. These movements have been joined in their opposition to the regime by other ethnic-based opposition groups, including the Afar National Democratic Front, the Tigray People’s Democratic Movement (TPDM) and the Ethiopian People’s Patriotic Front (Amhara). The TPDM claims to have inflicted 127 Ethiopian government casualties in a May 7 battle in the Tigrean homeland in northwest Ethiopia (Voice of the Broad Masses of Eritrea, May 12). Many of these groups receive support from the TPLF’s enemies in Eritrea.

Zenawi is currently faced with a dilemma: with no sign of AU reinforcements for Somalia, his U.S. sponsors are demanding that the Ethiopian army remain in Mogadishu despite the desperate need for these troops at home.

This article first appeared in the June 5, 2007 issue of the Jamestown Foundation’s Terrorism Monitor