The Islamic State – West Africa Province (ISWAP) claims to have killed four Canadian soldiers and “dozens” of Chadian troops on November 24 when an IED exploded under their boat on Lake Chad. The survivors were then targeted by fire from automatic weapons onshore (RocketChat, November 26, 2020). The incident occurred at Ngouboua on the Chadian side of Lake Chad, opposite the Borno stronghold of Boko Haram and its splinter group, ISWAP. N’Djamena acknowledged only four Chadian dead and 16 wounded, with no mention of Canadians. ISWAP repeated the claim on its Amaq news-site on November 26, saying the heavy losses suffered by Canadian and Chadian forces had prevented an attack on ISWAP units near Ngouboua (BBCM, November 27, 2020).

A December 8 AIS query to Canada’s Department of National Defence regarding these reports received the following response: “The claim that Canadian soldiers were killed or at all involved in this incident is completely untrue.”

The struggle between BH/ISWAP and the Chadian military has grown even more bitter this year as it continues to intensify. During a counter-terrorist offensive in the Lake Chad region, 92 Chadian soldiers were killed and 47 wounded in a March 23 Boko Haram attack on Boma (Lac Province). On April 18, 44 Boko Haram prisoners were found dead in a Chadian prison while awaiting trial. Post-mortem examinations detected toxic substances in their stomachs; Chad’s justice minister Djimet Arabi suggested “collective suicide” (AFP April 18, 2020). The incident came two days after the Islamic State mocked Chad and the March Multi-National Joint Task Force (MNJTF) offensive in an editorial in its al-Naba weekly magazine.

The various al-Qaeda and Islamic State-aligned militants operating in the Sahel region of Africa (including the Lake Chad region) are now opposed by a much larger array of counter-terrorist forces involving the militaries of some 60 nations.  These include forces belonging to the following formations:

The one thing common to all these counter-terrorist efforts is that Canada does not belong to any of them. So how does the death of four Canadian Special Forces members come to be proclaimed in an Islamic State announcement?

Chadian president Idriss Déby Itno insisted in early April that all Boko Haram elements had been cleared from the islands of Lake Chad (Tchadinfos.com [N’Djamena], April 4, 2020). The Islamic State, however, is determined to use the opportunity presented by regional states currently diverting their attention from security operations in favor of direly needed public health measures and economic reconstruction to correct the damage done to already fragile economies by COVID-19.

ISWAP intensified their operations in the region around the Chadian village of Ngouboua later in April, with an attack on the shores of Lake Chad between the villages of Litri and Ngouboua on the 17th. Equipped with firearms, the extremists damaged one boat and seized some weapons (RocketChat, April 19, 2020). ISWAP later videotaped the execution of a Chadian prisoner taken in the attack (AFP, April 27, 2020). 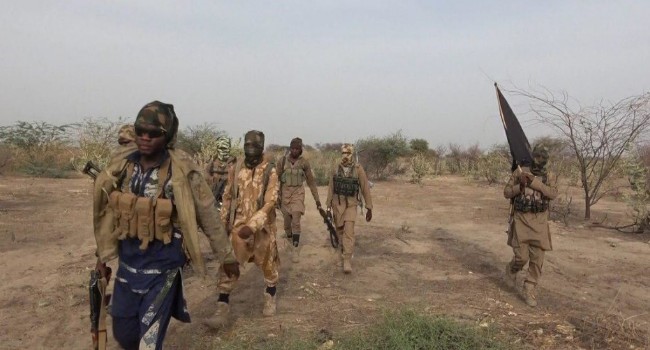 In July, ten Chadian soldiers were killed and another 20 wounded by an ISWAP IED in the village of Kalam on Lake Chad (al-Wihda [N’Djamena], July 10, 2020).

ISWAP issued a statement on November 20 describing the remote detonation of an IED against a troop-carrying boat on the 18th between the villages of Goboa and Litri that killed “dozens” (RocketChat, November 20, 2020). Four days later, Chad reported the loss of four soldiers and 16 wounded after a boat near Ngouboua hit an underwater IED (Al-Wihda [N’Djamena], November 25, 2020).

Since the Ngoubouoa attack, ISWAP claims to have pursued its campaign against Chadian troops on Lake Chad with a December 1 IED attack on two boats carrying Chadian troops near Ngouboua, allegedly killing 30 soldiers, though this report remains uncorroborated (RocketChat, December 8, 2020).

Jihadist activity has grown intense in the tri-border region where Mali, Niger and Burkina Faso meet. After pulling back from cooperative military efforts earlier this year due to a perceived lack of international support, President Déby recently committed to the “quick” deployment of a Chadian battalion in the tri-border region, where it will likely be involved in heavy fighting (Al-Wihda [N’Djamena], December 1, 2020).

Having made repeated commitments to favor peacekeeping efforts over the counter-terrorism deployments of the Conservative government during the 2015 national election, the incoming Liberal government eventually committed to a modest contribution to the MINUSMA peacekeeping operation in Mali that involved little chance of encountering armed jihadists. The mission, limited to a strict timeline of August 1 2018 to July 31, 2019, consisted of a medevac helicopter squadron of 3 CH-147F Chinooks and 5 CH-146 Griffons that could also transport UN personnel and equipment in the region. Ultimately, the Canadian Forces’ Task Force Mali would conduct 11 medical evacuations and over 100 transport missions.

Far from addressing the menace of terrorism and extremism to the impoverished population of the Sahel, the Canadian mission arrived bent under the burden of Justin Trudeau’s liberal vision of the military as a band of uniformed social-workers engaged in a battle against climate change and gender inequality. More importantly, Operation Presence-Mali was a political mission – an unwelcome necessity required to further the Prime Minister’s vain efforts to obtain a rotating seat on the UN’s Security Council. In the end, Canada’s contribution, competent in itself and surely appreciated by the wounded soldiers it assisted, contributed nothing to the elimination of terrorism in the Sahel and the UNSC seat never materialized. When Trudeau visited the Canadian troops in Mali in December 2018, his main message to them did not concern the importance of ending terrorism, but rather the importance of ending the Canadian mission on time. Statements from government and party officials emphasized the safety of the members of the mission, to the point it began to appear that ensuring its own safety was the mission’s primary goal. 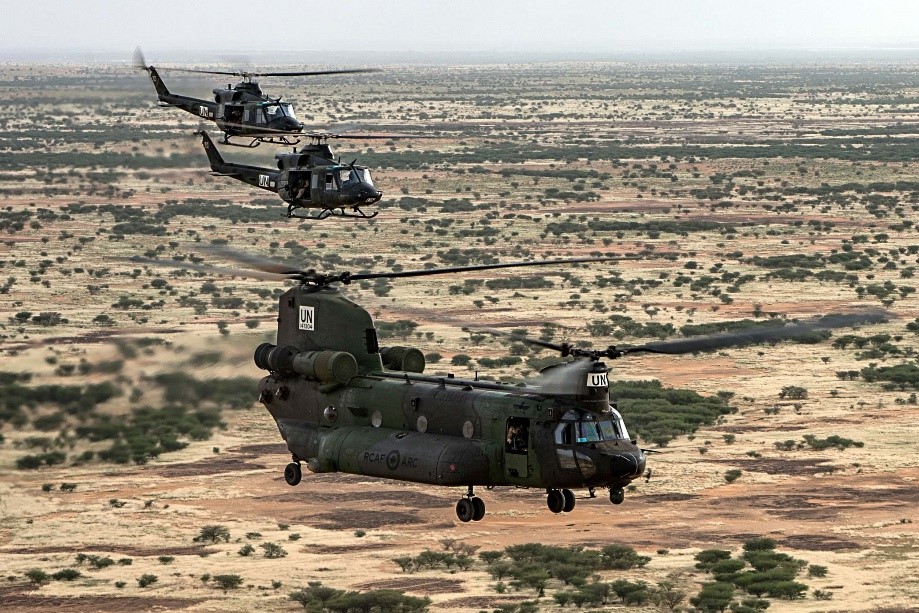 The Canadian deployment was scheduled to end in mid-summer 2019, but Canada agreed to an extension of one month. Though their Romanian replacements could not begin their deployment until mid-October 2019, the Canadian government repeatedly dismissed all appeals from the UN and its allies to cover the gap between deployments. With only days left before withdrawal, the government agreed to provide transport to the Romanians and a small transition team to work with early Romanian arrivals using contracted helicopters, though the latter were not properly equipped for medical emergencies (CP, August 28, 2019).

Then-Minister of Foreign Affairs Chrystia Freeland offered that the Canadian mission had taken “tangible steps to secure lasting peace and stability for the people of Mali,” but failed to explain just how a small 12-month air-ambulance and transport deployment accomplished this (DND News Release, August 31, 2019).

In reference to the mission, Minister of National Defence Harjit Sajjan declared “Canada will continue its support to the UN while leading the inclusion of women in peace operations” (DND News Release, August 31, 2019).  Following a series of scandals involving UN peacekeepers and an assessment that male peacekeepers lacked understanding of, or empathy with the needs of women trapped in combat zones, there have been many international calls for a greater number of female peacekeepers. Sajjan, however, appears to have missed the point – the calls are for more women on the front-lines of peacekeeping operations, not in rear areas with little or no contact with the local population.

Other Canadian Military Deployments in the Sahel

Unlike France’s impressive Operation Barkhane, existing Canadian operations in the Sahel are small and little-known even in Canada, involving no direct confrontations with terrorists or religious extremists.

The Canadian Armed Forces (CAF) run a training program in Niger for members of the Forces armées nigériennes (FAN), Niger’s national army. Known as Operation Naberius, the program involves up to 50 CAF Special Forces troops per year and is scheduled to run until March 2023.

Using RCAF Globemaster III and Hercules transports, Canada’s Operation Frequence has assisted in the movement from France of French military equipment and personnel belonging to Operation Barkhane. The operation has no presence on land in the Sahel.

The Liberal Party’s 2019 election platform proclaimed: “We will renew Canada’s commitment to peacekeeping efforts, and use the expertise of our Armed Forces to help others prepare for climate-related disasters.” By August 2020, Canada’s global peacekeeping deployment consisted of a mere 34 police officers and military personnel (CP, August 3, 2020). By comparison, in 1992, Canada had 3,285 peacekeepers serving abroad.

Justin Trudeau’s dismissive attitude towards the armed forces (a legacy of his late father, Prime Minister Pierre Elliot Trudeau) and rejection of the use of force against terrorists became evident when Islamic State radicals rampaged through northern Iraq in 2014. As appeals poured in for military assistance to end the IS atrocities, Trudeau instead asked: “Why aren’t we talking more about the kind of humanitarian aid that Canada can and must be engaged in, rather than trying to whip out our CF-18s and show them how big they are?” (CTV News, October 2, 2014).

After the 2016 Islamist terrorist attacks in Nice, France, Trudeau insisted that “Canada stands with France as a steadfast ally [and will] continue to work with our allies and partners to fight terrorism in all its forms” (CP, July 15, 2016). In reality, fighting terrorism in any of its forms has not materialized as a priority of the Trudeau government and Canada has done little to “stand with France as a steadfast ally.”

Unfortunately, Canada’s timid approach to counter-terrorism and peacekeeping may be spreading to its allies. The arrival of 300 UK troops in Mali this month was expected to add a sharp edge to MINUSMA, which has suffered some 200 deaths from IEDs and clashes with regional jihadists.

Trained in long-range desert reconnaissance, a task force formed from the Royal Anglian and Light Dragoon regiments using “Jackal” armored fighting vehicles will now instead perform training duties at a UN camp in Gao, with reconnaissance operations restricted to a 10-mile radius around the base. According to a Ministry of Defence spokesman, the British forces will remain at the base “until they know it’s safe” (Sun [London], November 16, 2020). The last-minute change to the mission’s operational mandate shocked MINUSMA’s Swedish commander, Lieutenant General Dennis Gyllensporre, who declared he did not need any more troops limited to their own bases.

To return to our original question – how does the death of four Canadian Special Forces members come to be proclaimed in an Islamic State announcement? A case of mistaken identity seems impossible; neither France nor any other European state has acknowledged the loss of four of its Special Forces. Chadian soldiers are well-known to ISWAP and unlikely to be confused for Canadians. Could this have been a warning from the Islamic State, a projection of the kind of losses Ottawa could expect in a future deployment to the Sahel? For reasons of Canadian policy, this too seems unlikely.

According to then-Foreign Minister Freeland, “It is precisely the democracies, it is precisely the countries that stand for values and human rights that also need to be ready to say we are prepared to use hard power where necessary” (CBC News, June 10, 2017). Despite this declaration, the Canadian government continues to shun “hard power” and deny its allies and the UN access to its large pool of highly capable French-speaking troops ready and capable to take on difficult tasks in the Francophone Sahel region. Even as Canadian citizens have been killed across the globe by the Islamic State and its affiliates during the Trudeau government (now in its second term), the Liberal Party has remained attached to the 1990s concept of “soft power,” or the ability to exert influence in global affairs by non-violent means. In these circumstances, a Canadian combat mission in the Sahel would seem to be the last thing the Islamic State needs to worry about.